Will Thailand Ever Break the Status Quo? 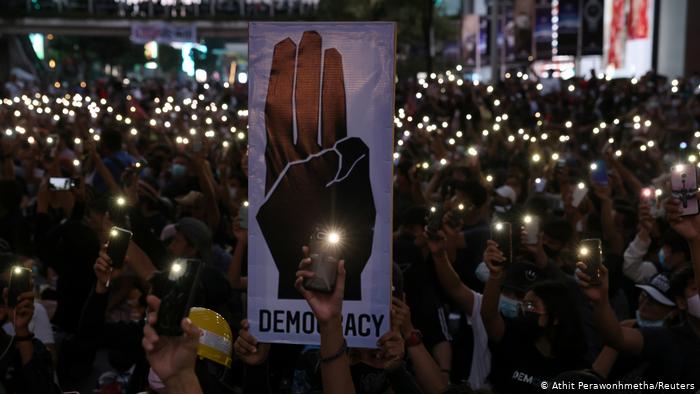 In 2020, Thailand gained international attention for a series of mass protests led by the Free Youth student group. Among many other democratic reforms, the student group called for the dissolvement of the parliament and the application of the rule of law in regards to the King [1]. This is not the first time that Thailand has experienced political unrest. In order to understand why this cycle of pro-democratic mobilization has persisted for so many years with no end in sight, we must recall past trends in both Thai history and other undemocratic regimes.

Modern Thai politics is built upon three main institutions: the bureaucracy, the military and the monarchy [4]. While the bureaucracy (now occupied by the military) holds legislative powers, the King mainly serves as the figurehead. The infiltration of the bureaucracy by the military is not an unexpected occurrence. Throughout the years, Thailand has developed a “coup culture” [2], falling victim to a dozen or so coups in times of political instability, with the most recent ones dating back to 2006 and 2014.

From 2001 until 2006, Thaksin Shinawatra ruled as the democratically-elected Prime Minister of Thailand. During his rule, Thaksin engaged in authoritarian behavior, targeting the human rights commission and showing apparent disrespect for the then King Rama 9, which sparked several controversies [3]. In 2005, the Yellow Shirt faction – consisting of Thaksin’s previous electorate such as the middle class as well as civil society organizations – mobilized against him, which culminated in the overthrowing of his government by the 2006 coup as well as his exile [3].

In line with the 2006 coup, the 2014 coup occurred with the intention of abolishing what remained of Thaksin’s political influence, which presented itself in the rise of the Red Shirt faction as well as the 2011 electoral win of Prime Minister Yingluck Shinawatra: a sibling of Thaksin, and a member of a party that had been affiliated with him [3]. Unlike the 2006 coup, however, the 2014 coup – headed by the current Prime Minister Prayut Chan-o-cha – led to the establishment of a military government that has remained in power until this day.

The normalization of coups undoubtedly poses a threat to Thailand’s democratic future. In 2006, many activists, civil society organizations and the Yellow Shirt faction saw the coup as “the lesser evil” in comparison to Thaksin’s authoritarian regime [3]. Since the military had established a decent reputation for itself in 2006, the same anti-Thaksin faction did not question its motives in 2014.

The initial trust that the anti-Thaksin faction had in the military quickly dissipated when Prime Minister Prayut Chan-o-cha drafted a new constitution that established a committee comparable to those in Communist regimes. The committee, named “The National Council for Peace and Order” [5], was built to consolidate Prayuth’s power.

Although the people no longer trust the military, it will be extremely difficult to eliminate an organization that had not only been around for decades but also institutionalized its role as the savior of political stability. Even if mass mobilization were to lead to democratization, who’s to say that the military would not swoop back in during the transition period to restore stability like it always has?

Empirical data further reinforces the notion that a “coup culture” is unlikely to foster democratization, indicating that successful coups correlate to a “[27% increase in the likelihood of] transition from one autocracy to another” [10]. As long as the military maintains its strength and is not reformed, coups will always pose a threat to democratization [14].

In maintaining a “coup culture,” the Thai military derives its legitimacy from the monarchy [7], an institution central to Thai political culture. As seen in 2006 and 2014, the military asserts its authority by imposing itself as a protector of the monarchy [3] and an opponent of the Red Shirt faction which prides itself on anti-monarchist sentiment [6]. Likewise, the monarchy depends on the military for the stability of the crown [7].

Although the symbiotic relationship between the military and the monarchy was less apparent under the reign of King Rama 9, it has become increasingly noticeable under the reign of the current King Vajiralongkorn [8]. For instance, both the current King and the military utilize coercive tactics in silencing criticisms or punishing treacherous acts. Prime Minister Prayuth has even revised the Thai constitution to the King’s liking [8].

Sharing mutual benefits and support, the military and the monarchy coalesce into a formidable force within the Thai political landscape, weathering the storms of mass mobilization while holding a firm grip on political power. It is very possible that, had the monarchy existed without the military and vice versa, the path to democratization in Thailand will be clearer.

The Thai political landscape has always been divided into antagonistic factions, which spurs high levels of domestic conflict. While the political presence of the Red Shirts and the Yellow Shirts has dwindled in recent years, 2020 has given rise to other main factions – the Loyalists and the Free Youth students – which remain as polarized as ever.

Empirical data shows that internal conflict within the Thai government or civil conflict “weakens the effect of [a] democratization event by about one-fourth” [9]. Thus, we can deduce that the transition to democracy would be quite unstable, and that factions would take advantage of the instability by vying against each other for positions of power during the transition period. It is very possible that the lack of coordination and trust between different groups would set the stage for the next “elected” official to abuse his or her power in office in order to hold onto political control.

Does this mean that Thailand’s future is doomed? Or that the country is heading towards a never-ending cycle of authoritarian regimes? Not necessarily. However, it is still important to keep in mind that Thailand’s political landscape triggers an imbalance between the benefits and costs of democratization. For example, while the path to democracy entails domestic conflict and bloodshed, the reforms made under the new regime may only appear democratic on the surface.

Other countries also appear to struggle with this kind of imbalance. Take Russia for example. Although more than a thousand people died during the 1989 revolutions, leading to the fall of the USSR and the rise of Boris Yeltskin who attempted to democratize Russia [11], the country today is still an illiberal democracy under Putin.

Similarly, Myanmar is once again facing a major setback to their fragile democracy in the form of a coup d’état in 2021 [15], despite the people’s previous attempt at overthrowing the military government back in 2007 [13].

Evidently, research has shown that undemocratic states tend to remain in the transitional period where, despite the emergence of some democratic reforms, true democracy cannot wholly materialize [12].

By looking at global trends and analyzing Thailand’s political landscape, we can now come to terms with the harsh reality that the path to democracy will be full of uncertainty and loss. Although there is still much to lose before Thailand can start reforming its governmental institutions, who’s to say that this feat is not possible?

7. Cogan, Mark. “Who rules Thailand, the military or the monarchy?” GLOBE, November 16, 2020. https://southeastasiaglobe.com/who-rules-thailand-the-military-or-the-monarchy/

8. “Relations between Thailand’s army and the king are becoming one-sided.” The Economist, September 5, 2019. https://www.economist.com/asia/2019/09/05/relations-between-thailands-army-and-king-are-becoming-one-sided