Why Taiwan, and Why Now? 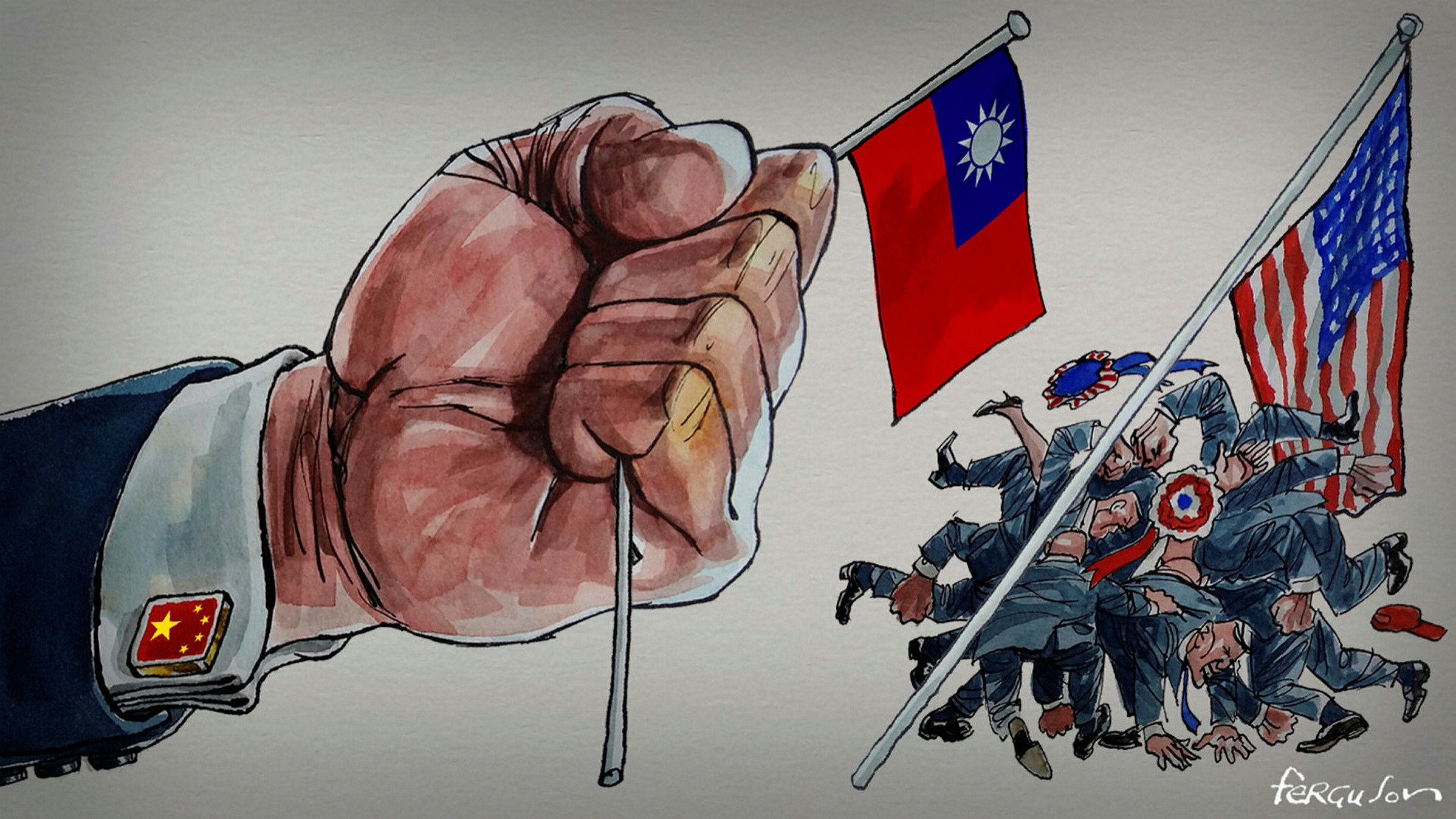 With its involvement and large contribution to defeating the Axis Powers in both World War I and World War II, the United States has established itself as the superpower of the Western Hemisphere. On top of its military success, the United States quickly rose to power in the last century to become the world’s largest economy. After becoming a recognizable force, the United States began interfering with countries around the globe in order to protect American interests and ideals. Thus, the country took on its role as the world’s police to continue acting in the best interest of the United States, such as protecting a free market, democracy, human rights, and liberty.

However, it is without question that the United States no longer holds the title of the strongest country in the world; China too has made a name for itself as an international powerhouse. Starting in the 1950s, China began demonstrating its military power by fighting the United States to a standstill during the Korean War, and assisting Northern Vietnam during the Vietnam War. Since then, China has also opened its economic markets to foreign trade and investment, boosting its economic development and reputation and quickly rising to become a world power within the Eastern Hemisphere. With these circumstances combined and considered, it is easy to see how China has become competition for the United States in the modern day.

After a civil war in 1945, the island nation of Taiwan officially annexed itself from China, and has lived independently ever since. Since regaining power, China (and the Chinese Communist Party) has aimed to reclaim Taiwan and have it rejoin the country. However, the people of Taiwan reject this idea, and repeatedly claim sovereignty over its geographical area regardless of China’s disregard for its self-determination. As recently as December 2021, the Taiwanese public has gone on hold protests rejecting reunification with China, regardless of China’s attempts to persuade them with potential economic benefits and security. China makes its intentions of reclaiming Taiwan clear by sending provisionary military troops to monitor Taiwan: a looming threat and warning of a takeover. Xi Jinping, the current President of China, has also directly pledged to annex Taiwan, claiming that it is an island country and thus has increased military activity and other forms of harassment and coercion. In order to protect the international balance of power, the United States must protect Taiwan, whether that be through military assistance or economic aid. If the United States chooses to remain neutral or not protect Taiwan — also known as the Taiwan Crisis — the United States will lose all current and future opportunities for presence and power in East Asia.

China and the United States have a notoriously volatile relationship. With China quickly establishing itself as a world power, the countries find themselves at a standstill as Americans fight to no longer have economic relations with China, claiming that jobs that belong to Americans are now being brought overseas. The relationship between both countries took a significant turn for the worse after the COVID-19 pandemic in 2020, wherein former United States President Donald J. Trump outrightly blamed China for the outbreak. As a result, animosities between both countries have risen significantly as the years pass. Though the relationship between China and the United States is widely recognized as extremely strained, it is crucial to understand why the United States must assist Taiwan now. Taiwan holds a significant presence with its contribution to the international economy, is vital to the defense of other East Asian countries, and helps continue protecting American ideals.

The United States must protect Taiwan in order not to lose a valuable channel for exports and a valuable trading partner. As a critical global supply chain partner, the island country provides the United States with electric machinery, vehicles, and iron and steel products with an estimated worth of $86.9 billion dollars annually. Taiwan’s economic significance also makes it a crucial partner for world powers. Taiwan is a reputable trading hub as the world's sixteenth largest trading economy with its value exceeding 800 billion United States dollars. Taiwan became the United State’s largest trading partner in 2021, making its independence to conduct business with the US of utmost importance. Thus, if Taiwan were to fall to China, the United States would not only lose a valuable trade partner, but would have to start from scratch in search of a new manufacturer for exports.

The United States must also protect Taiwan for its geographic significance which aids both the United States’ military strategy and presence in east Asia. The island country lies in the center of the westernmost island chains of the west Pacific, and is a crucial player in the first island chain, which refers to the chain of island countries that border China and its waters. Within the first island chain, Taiwan boasts a size thirty times that of Japan, and has a significantly larger amount of greenery and forest that aid in combat when it comes to defense and guerilla warfare tactics. The larger land mass that Taiwan provides would be the optimal place for United States troops to be stationed rather than Japan, providing more space for maneuver and concealment of military troops to be stationed in times of war. Taiwan’s geographical location is also important for the United States to continue holding a presence in east Asia. The Taiwan Strait, the body of water that divides Taiwan from China, is the gateway that the United States and a majority of the Western Hemisphere use to reach important ports in Northeast Asia. If Taiwan falls, the United States will undoubtedly lose access to East Asia, severing and dramatically weakening its current relations and trade with other East Asian countries. Thus, if Taiwan were to fall to China, the United States would not only lose a critical military strategy and support for future wars in the Eastern hemisphere, but also stand to lose from a trade perspective by having access to its current trade partners cut off.

The modern international debate has centered around whether or not the United States is overstepping its boundaries and infringing on other states and governments that presumptuously did not request its help. The United States even has a previous history of not only infringing on other states, but going further by overstepping boundaries and mansplaining other countries’ territories. With the most notable examples being the Vietnam War and the Korean War, scholars argue that the United States has intervened when intervention was unnecessary, causing more conflict and harming relations with great powers such as China and Russia. Thus, the opposite side of the Taiwan Crisis argues that the United States should once again not overstep its power and influence and stay neutral in order to not bring forth collateral damage by angering another great power. However, in the context of Taiwan, the United States is not overstepping any boundaries; Taiwan is explicitly asking for assistance. Joseph Wu, Taiwan’s foreign minister, has gone on to declare that Taiwan aims to make itself an unattractive target for China to invade by guaranteeing United States intervention in the case of a Chinese invasion. With a disadvantage in geographical and military power, Wu and the current Taiwan administration understand that the only way Taiwan can defend itself is by allying with stronger powers such as the United States. Considering the United States’ public’s negative opinion of the eastern country, the United States risks falling into the public’s disapproval by not taking a direct stand against China. Further, with so much at stake with the fall of Taiwan, the United States clearly stands to lose when staying silent on the matter rather than taking action.

The United States also must protect Taiwan because it is the only country with the means to do so, and is the only country that can equally level off with China. The United States military defense budget is the largest in the world, with China’s military defense budget being significantly smaller. However, China has a larger arsenal of weapons with more sea and air vessels, such as military-grade warships and aircrafts. It is estimated that in a theoretical military conflict, the United States would still prevail thanks to its larger military budget and more experience with command-and-control capabilities, but China would certainly give the United States a run for its money. Taiwan, on the other hand, would not be able to defend itself against a global superpower such as China. In regards to geographical size, China is 276 times larger. Geographical considerations prove proportionate when it comes to their respective militaries as well. China holds significantly more manpower; with ten times the manpower and size, seven times the land power, and fourteen times the defense (military) budget. Even if neighboring countries decided to intervene and assist Taiwan should China invade, China still holds an overwhelming advantage. To illustrate, if Japan, South Korea, and Thailand all decided to provide military support for Taiwan, China would still have more military power than all of the countries combined. There is no question that the discrepancy in power between China and other countries in the Eastern hemisphere is incredibly large; this leaves the United States as arguably the only country to have the resources to compete. Though China owns the most active military personnel, the United States has the largest military budget, and still has what experts consider the world’s most powerful military. Without the United States’ intervention, Taiwan would be unable to defend itself.

Beyond issues that directly affect the United States, China seizing the Taiwan Strait brings forth the possibility of the domino theory taking place with neighboring countries. Introduced in the Cold War era, the domino theory is a concept wherein if one country succumbs or falls to an external or internal force, it puts neighboring countries at risk. In the context of China reclaiming Taiwan and the Taiwan Strait, scholars fear that once (and if) China reclaims Taiwan, they will aim to conquer the rest of the East Asian countries, namely Japan and South Korea. Taiwan’s sovereignty actively defies the Chinese Communist Party, which is currently in power in China. Even just the symbolism of the United States agreeing to assist and provide aid for Taiwan sends a message of protecting other countries from China’s grasp on neighboring East Asian countries. Though neighboring countries hesitate to bring attention to themselves by directly standing against China, the possibility of US intervention adds a layer of security to their and Taiwan’s sovereignty. If the United States does not aid Taiwan, it leaves China’s neighboring countries in a precarious situation.

The Taiwan Crisis has been an ongoing concern for decades, but urgent protection measures are necessary now because of China’s deliberate actions to declare their intentions. If the United States is indeed holding true to its belief of being the strongest nation in the world, protecting Taiwan would be the best way to prove that the country lives up to its title. The United States is the only country that is capable of going head-on with China in military conflict with its large defense budget and manpower, and will face great losses if the island country is once again reclaimed. The United States will not only lose a valuable ally and trade partner, but will also be shut out of Eastern Asia, negatively affecting its relations with neighboring countries such as Japan and South Korea. Though some are against the idea of the United States’ intervention, Taiwan is deliberately asking for the United States’ help in the matter, and the United States public approves of taking a direct stance against China. In order to live up to its reputation, the United States must (and should) defend the island country, otherwise it will find Taiwan under China’s chokehold for decades to come.