Women have never been more involved in the workforce than today. Since the industrial revolution and before, women worked in textiles and service industries, but never competed with men for the same careers. Women now hold over half of all jobs in the country and comprise the majority of college students [2][3]. While women have made enormous strides to achieve similar levels of professional success as men, their progress is not without problems.

This unprecedented rise in women pursuing careers has coincided with an unprecedented rise in depression and substance abuse. Almost one in five women over the age of 18 has taken antidepressant medication in the past 30 days, over double the rate of men [4]. Interestingly,  antidepressant use also rises with age, with a quarter of older women dependent on medication. Antidepressant use is not distributed evenly. Depression is higher for college graduates, those who are not cohabiting or married, and those who work, with more strenuous work correlating with higher SSRI usage [5]. Some researchers attribute the higher rates of depression to biological factors unique to women, such as menopause [6]. These factors explain why women are more vulnerable to depression than men. The correlation between remaining single and working a strenuous job with depression is exacerbated by women’s unique biological factors.

Women are also entering a workforce oversaturated with college graduates, leading to diminishing returns. Simply put, the US produces more professionals than it knows what to do with. Since the 1970s, the population has grown by slightly under 50%, while the number of lawyers has tripled [7]. The number of graduates and PhDs has soundly outpaced the number of jobs available to them, especially in non-STEM fields. The struggle of finding a suitable and worthy career while saddled with trillions of dollars of student debt places the average professional woman in an unwinnable position.

Cultural and legal factors also force many American women to sacrifice the ability to raise a family to advance their careers. Professional women have less time to dedicate to passions outside of work; the percentage of women working over 50 hours per week is greater in the US than in any other country [8]. Remember, depression is more common in those who work strenuous hours [5]. Women also face more interruptions to their career than men, due to childbearing and childrearing. Men return to work faster, if leaving at all. The US is one of only a handful of countries to not guarantee paid parental leave, leaving only 17% of US workers with access to paid family leave [9][10]. Not only do women’s wages on average decrease by about 4% per child, men’s wages actually increase after fatherhood [11]. The economy clearly discourages women from having children.

The phenomenon of high career competition and uncharitable labor laws is accompanied by a rapid and unprecedented rise in single women. By 2030, almost half of women ages 25-44 will be single, the largest share in history [12]. Almost a third of women ages 30-34 are childless, almost double the rate of the 1970s [13]. Again, people without partners or families are more likely to suffer from depression [5]. Despite facing large incentives to postpone or forgo motherhood, many women want children. A poll by Gallup in 2013 shows that only six percent of Americans between 18 and 40 do not want children, almost unchanged from 2003 [14]. Gallup has also found the ideal family size has steadily hovered at about 2.6 children since 1978, while the US birth rate is only about 1.6 children per woman. Outside economic pressure represents a large reason for the gap between desired and actual families. Even among big earners, almost nine in ten women desire children, according to a survey performed by Harris Interactive with the National Parenting Association [9]. Of the women who do plan to start a family, however, over 80% are postponing it to focus on their careers [15]. While raising a family becomes more difficult and costly, a large portion of people still want one, and those who do not still deserve the choice. 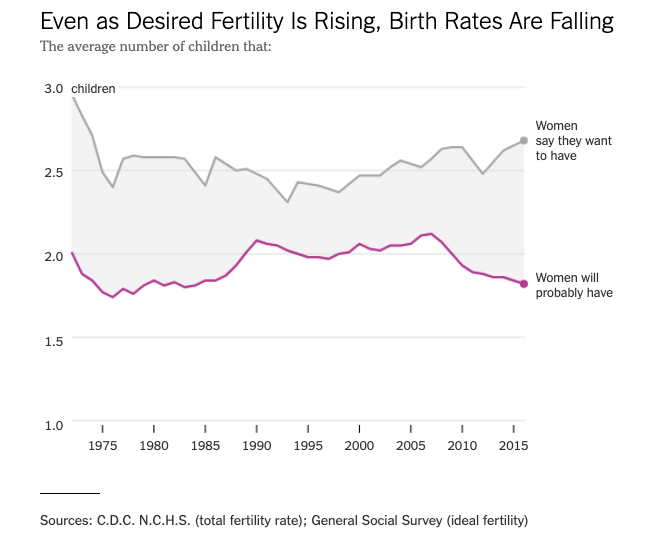 The Disparity Between Desired and Actual Fertility [16].

When women do successfully start a family, they contribute more time and effort to household necessities than their partners. According to the Harris poll, less than one-tenth of high-achieving men feed their children, clean their homes, and miss work to care for a sick child. High-achieving mothers then bear the responsibility, with about half of them performing basic household chores and family-rearing activities. 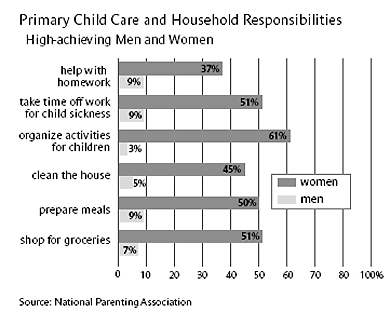 The Vast Difference Between Men’s and Women’s Household and Family Contributions [9].

Women today sit in an unwinnable position. Women are graduating into oversaturated fields shouldering enormous college debt. High-achieving women who want children must either sacrifice raising a family to maintain their careers or suffer a penalty to their incomes for having a child. In contrast, men suffer no damage to their careers for starting a family. If a working woman does choose to start a family, she will almost certainly take on the work of shopping, cooking, cleaning, and childcare. All these factors lead to a high risk of depression, alcohol dependence, stagnating careers, and postponed or sacrificed families.

A Universal Basic Income (UBI) program for women only could alleviate some of the problems of this dilemma. A monthly income supplement would allow women more freedom to begin families and pursue their passions. Many households would be financially stable without both spouses working, providing more time to raise children. Women would not be forced to prioritize career over family, or become dependent on their husbands for financial security like in the past. Ideally, women would pursue a profession or degree based on genuine interest or ambition instead of out of monetary necessity, which would help reduce the oversaturation of many professional degrees. Alleviating these problems would also address the depression and mental health issues that they bring.

One proposed counterplan is to compensate people for their housework and child-rearing labor instead of a universal program. It is undeniable that the work many women do at home represents an enormous unappreciated positive externality. However, there are two reasons why a universal approach better serves the needs of women. First, determining the value and extent of housework and child-rearing done by women is impractical.  Secondly, compensating women for family labor would not help men or women in college or early in their careers, who are struggling to build relationships and establish an income source. A universal program will help younger and older women alike.

Why not a universal income for all citizens? The issues with mental illness and loneliness outlined previously in the article affect men more than women. Men commit suicide at several times the rate of women, and unmarried men report higher levels of loneliness than unmarried women [17]. However, a UBI program would primarily address economic struggles, and women suffer more economic challenges than men. The well-known gender pay gap between men and women is improving, but remains at sixteen cents per hour [18]. As mentioned before, while women’s careers stall after having a child, men’s incomes actually increase slightly. Lastly, women are expected to contribute more to household responsibilities and do contribute more. The issues men face are widespread and serious, but a UBI program aims to solve economic problems foremost. Women face larger economic challenges relative to men, especially when choosing to start a family, so a UBI program would address the needs of women more than men.

The idea of a form of universal income to alleviate social disparities is not new, even in the United States. In 2020, Mayor London Breed of San Francisco launched the Abundant Birth Project [1]. This program, designed to ameliorate racial gaps in maternal and infant health, provides a targeted basic income of $1,000 a month to pregnant Black and Pacific Islander women. The state of California deemed the program a success and has invested millions of dollars to expand the program to hundreds of mothers in multiple counties over the next few years [19]. University of California researchers will monitor the impact of the program, but the rapid growth and endorsement indicate early success.

Women today face impossible expectations: graduating college, maintaining a high-earning career, raising a family, and maintaining a home. In reality, women must make difficult and involuntary sacrifices, either postponing their family to focus on their job or accepting a substandard career to raise a family and do chores. Women deserve the chance to live up to what society expects of them instead of being set up to make less money than men while having fewer children than they desire. Women also deserve to voluntarily choose something as important as lifestyle and career path instead of money making the decision for them. Universal Basic Income for women would balance the playing field with men and elevate women to tackle their sky-high expectations. A world with UBI for women would see larger families, less depression and substance abuse, and women empowered to make their life decisions for themselves. The goal is not to incentivize women to form relationships or prioritize family, but simply for women to freely make important life decisions without economic restraints.