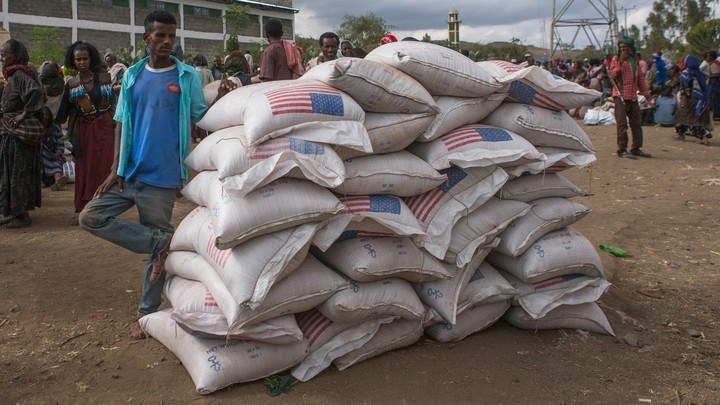 Hunger and food insecurity have been global crises for decades, one that is progressively worsening. According to a 2020 World Hunger report [1], approximately 750 million, or 1 in 10 people, suffer from severe food insecurity and malnourishment. Over 55 countries, many of which are considered to be developing, face hunger crises. However, such issues in these countries hardly developed overnight. Many of these nations were historically subjected to colonialism, and the aftereffects of colonization have manifested in various forms over time: environmental depletion, disease and illness, and famine.

Countries and organizations across the world have mobilized to aid in satiating hungry populations and since the 1950s, the United States has been the largest international food aid donor. Today, the U.S. distributes $2.5 billion in food aid internationally, but the efficacy of American efforts is questionable. While US food aid might be beneficial in mitigating global hunger momentarily, it operates in a manner dangerously close to neocolonialism as it creates an economic dependence where local agricultural systems are suppressed and international countries must rely on the US for sustenance. Moreover, the food donations are often culturally inappropriate, as they do not honor the food sovereignty and indigenous nutritional landscape of the recipient country.

Many countries affected by food insecurity have a history of being colonized. World Vision estimates that 22% of the world’s undernourished population resides in Sub-Saharan Africa; Africa holds the highest percentage of food insecure peoples. But hunger, at its root, is a consequence of poverty. Lack of stability in economies, poor political structure and inadequate healthcare all contribute to the growing hunger crisis and these conditions largely exist due to Western oppression. The arrival of colonizers upended local economies and land that was previously used for subsistence farming was exploited for the expedited production of cash crops [2] such as tobacco and tea. It meant that nations could not develop their political systems on their own terms but that they were forced to yield to Western agendas. It meant that the countries’ shield of isolation was shattered and locals became casualties to foreign diseases. It left land and resources depleted and degraded and political systems weakened without centralization or structure, and these colonized countries are yet to recover.  As such, they now deserve support in rebuilding their economies and fostering systemic change. The U.S. not only fails to aid countries in this state, but actively harms them.

While the world has dissolved all traditional forms of colonialism in Africa, modern-day offerances of food aid arguably seem reminiscent of colonialism. U.S. food aid is lauded as a humanitarian service, but it often inhibits local economies’ prosperity. Theoretically, the influx of free food through the form of donations would reduce food demand and lower farmers’ selling price. Thus, domestic food costs would decrease and the local economy falters [3]. Without a stable, active economy, countries cannot feed their populations and will instead rely on the perpetual provision of food donations, as has happened in the past. In the 1950s, Bolivia became a recipient of the U.S. Food for Peace aid program, where they received donations of flour. While the aid satiated the country’s citizens, the overwhelming availability of flour led to a decline in their domestic flour production and adversely impacted their economy to a degree where they became dependent on U.S. flour imports [4]. Within the same Food for Peace program, data suggests that food aid has stagnated per capita food production in recipient countries, thus inducing food aid dependency [5]. Beyond this direct effect of food donations on local economies, food aid indirectly suppresses opportunities for internal growth and development within the countries’ political and economic systems. Poverty, weak supply and demand, and hunger are conditions that can only be amended with systemic, political changes, and local governments would be forced to implement these changes if their citizens were left otherwise unhelped. However, the supply of food aid conceals these warning signs that might otherwise incite action. When food donations create a cycle of dependency, they do more harm than good.This reliance can also consequently compromise nations’ food sovereignty and social independence.

Food is not only a nutritional necessity, but also a social construct. It is a component of community, a language of love, and a representation of culture. Every country that is a recipient of food aid has an independent, indigenous cuisine, and food donations rarely respect these traditions. Citizens possess the right of food sovereignty, or the right to consume healthy and appropriate foods, and the right to define their food systems independently. However, U.S. shipments of corn and rice are culturally inappropriate and could eventually result in the erasure of a host of indigenous cuisines. For example, corn, or maize, is not an indigenous crop in the Africas; it is native to the Americas, but the U.S. donates significant amounts of corn to African nations as food aid. Donations may also lack holistic nutritional value; many populations suffer from micro nutritional deficiencies.  Researchers in the 1980’s logged high numbers of citizens in Kenya consuming food aid but suffering with scurvy, night blindness, or pellagra, all of which result from lack of nutritional groups [6]. Additionally, programs that aim to provide nutrient rich foods such as U.S. blended food corn soy blend (CSB), are often provided only to specific feeding programs that are targeted towards mitigating certain nutritional deficiencies rather than general food donation programs, which serve to ameliorate food deficiency as a whole. U.S. food donations do not enable cultural and nutritional fulfillment, and its effects could harm many indigenous generations to come.

A comprehensive consideration of American international food aid demands an observation of its founding history and motivations. Food aid officially became a tenet of U.S. international diplomacy after the Second World War, when European countries were wracked with poverty and malnutrition. As part of the Marshall Plan, the U.S. government formed short-term aid programs to reconstruct these nations. By the 1950’s, Europe had largely recovered and food from U.S. agriculture began piling up. Thus, in 1954, President Dwight Eisenhower signed into law the Agricultural Trade Development and Assistance Act of 1954 in order to distribute the country’s accumulated surpluses. Today, this legislation is known as the Food for Peace program and accounts for the majority of American international food aid [7]. While the U.S. now considers Food for Peace to be a humanitarian effort, it essentially was founded as a form of agricultural dumping. Agricultural dumping refers to the practice of exporting goods at a price that is lower than the price of production. This is harmful for many reasons, the primary one being that the importing countries’ farmers cannot compete with the export prices and domestic markets fail—a problem that would be exponentially more harmful in developing countries since their economies are already weaker [8]. Not only does Food for Peace undermine foreign economies, its rules ensure that America’s economy prospers. The terms of Food for Peace mandate that most donations must be purchased, processed, and shipped from the U.S.. This means that even if there is food available at another location closer to the crisis, the U.S.will still ship donations from America; this is inefficient in terms of time and money.

The global hunger crisis is a complex issue, and there is no correct answer. It can only truly be ameliorated with institutional changes, and countries with hungry populations deserve international aid and support. Specifically, those with a history of colonialism that have been ceaselessly exploited, violated, and capitalized upon. Their land is often viewed as desolate and “third world,” but this is a dangerous narrative because it perpetuates the notion that these countries are inferior. Our rhetoric must be amended. Countries that want to provide aid should abandon Western capitalism and colonialism motives that may fuel “humanitarian” initiatives and instead pursue efforts that enable internal growth in developing countries – this could exist in the form of medical or financial aid. The U.S. policies regarding international food aid should be reevaluated and repurposed to better fit countries’ needs. European nations transitioned to financial donations in 1996, and Canada did the same in 2010; the United States is the only remaining prominent donor that continues to donate food. If the U.S. could reallocate the billions of dollars that fund food towards monetary donations, we might be able to bridge the gap between food supply and food insecurity.