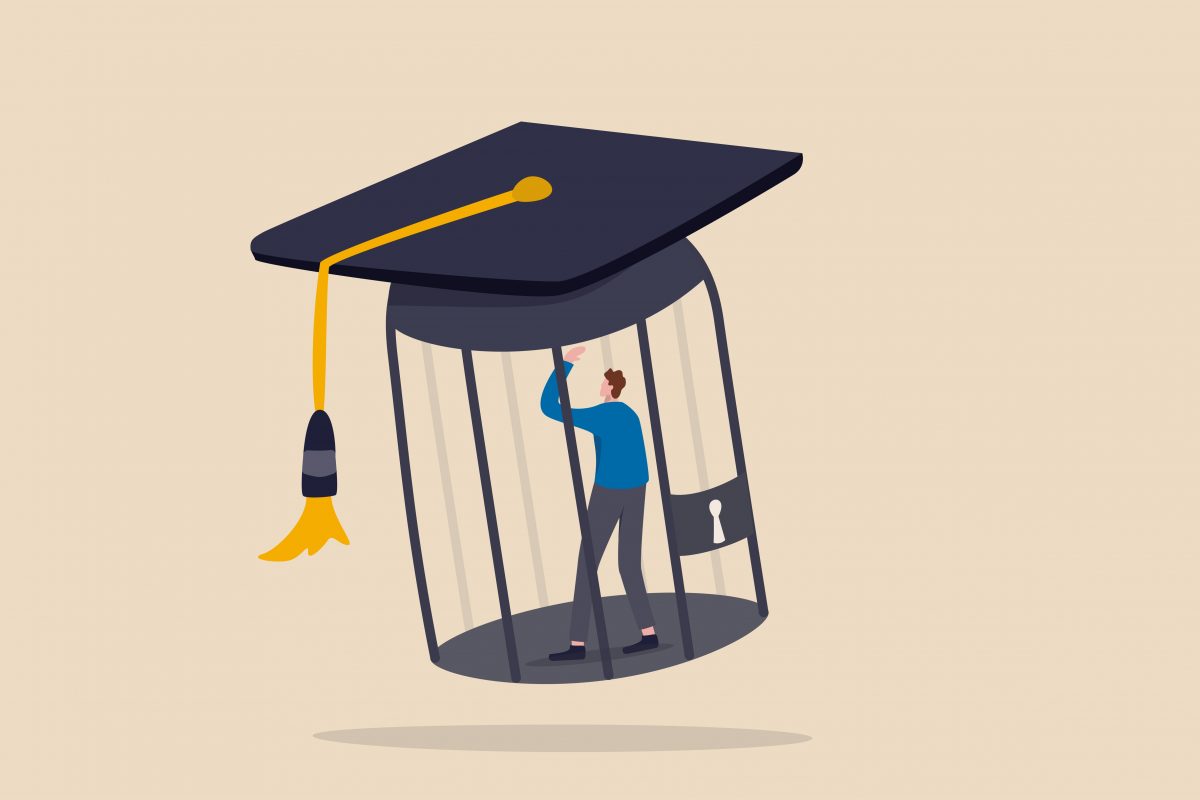 Work hard in high school to get into a good college. Work hard in university to be accepted into a high-ranking master’s program. Upon completion of your master’s, be guaranteed a variety of job offers to choose from. Presented with this narrative our entire lives, many students such as myself buy into it without realizing that the benefits of attending university in the U.S. often do not outweigh the enormous costs of tuition. Thus, it’s no wonder why student loan debts in the United States have grown exponentially in recent decades. From 1995 to 2017, federal student debt increased from $187 billion to $1.4 trillion, an approximately 700% increase [5]. According to the latest statistics, there are now approximately 45 million student loan borrowers [3], and seven out of every ten college students graduate school with student loan debt [1]. If nothing is done to combat the already absurdly high rates at which debt is accumulating for millions of college students, then vulnerable students will continue to fall victim to debt traps they will hardly be able to escape within their lifetimes.

Student loan debt influences several important aspects of a student’s life far beyond their graduation day, perpetuating a society in which impossibly high debts control the majority of the decisions graduates make about their futures. An education should be assisting students in their post-college pursuits – instead, enormous debts are only serving to tie them down, acting as a metaphorical ball and chain students unwillingly drag around with them wherever they go. In order to release students from these debt cycles, granting them control over their own future well-being, Congress must prioritize and pass legislative policies targeting the cancellation of student loan debts while simultaneously proposing increases in funding for public schools.

The tremendous increases in student debt within recent decades can be attributed to a multitude of factors. For one thing, the number of people taking out student loans has significantly increased – 4.1 million borrowers in 1995 has turned into 8.6 million in 2017 [5]. This growth can partially be attributed to a simultaneous increase in the number of students actually enrolled in and thus borrowing for college, which can in turn be explained by an array of demographic and economic factors. To name one, “the economic benefits of higher education, such as higher earnings and lower rates of unemployment compared to those without a college degree, and a growth in the U.S. population increased the demand for such degrees” [5]. Due to the growing importance of a college degree when entering the workforce, many students feel as though they have no choice but to pursue higher education if they wish to secure jobs after graduation, let alone high-paying ones. Thus, in their attempts to pursue an education that has become practically vital in determining how lucrative their future jobs will be, the current U.S. education system merely subjects students to absurdly high tuition costs and the inevitable debts that follow.

Students are also borrowing more money on average each year. From 1995 to 2017, the average amount borrowed each year grew by 35 percent [5]. Such a significant increase was primarily due to rising tuition costs – from 1995 to 2017, the average tuition price for a public four-year undergraduate university grew by an astronomical 120 percent [5]. A variety of factors have increased the price of tuition, the most premier being the decreased rates at which schools are receiving funding from state and local governments [5]. The combination of rising tuition costs and higher living expenses results in “gift aid,” such as Pell Grants, losing most of their value. The maximum Pell Grant award in 1975 covered about 80 percent of the average cost of attendance at a public four-year university; nowadays, it only covers 29 percent of the average cost. The conglomeration of the swell in tuition prices and drop in grant amounts directly correlates to a simultaneous increase in students’ reliance on loans as a method for financing their education [5].

There are tremendous psychological tolls associated with the accumulation of student debt. While attaining a higher education is supposed to assist students in securing higher-quality jobs and maintaining lifestyles that are centered around their well-being, the psychological impacts of the huge financial burdens that students take on to finance their education oftentimes leave many questioning if it was even worthwhile to pursue a degree. Additionally, depending on a student’s race, the loans they face four years after graduation differ quite drastically – “48 percent of Black students owe 12.5 percent more than the original loan amount after the same timeframe, and hold 186 percent more debt than their white counterparts even 15 years after graduation” [4]. Thus, student loans are not only harming the health and well-being of all students, but are also inherently contributing to the perpetuation of systemic racial inequalities.

Not surprisingly, the declining mental health of borrowers is also correlated with the accumulation of debt. Stress and anxiety are just a few of the mental health issues experienced by students who have taken on massive college debts. In fact, a 2021 mental health survey actually found that “1 in 14 borrowers experienced suicidal ideation in response to the financial stress of student loans. Among borrowers who were unemployed or making less than $50,000 per year, this rate jumped to 1 in 8” [4]. Pursuing a higher education without taking on significant financial, psychological, and mental tolls should not be a privilege that can only be experienced by the ultra-wealthy, but rather a right granted to all. Even beyond this, from an economical standpoint, the increasing rates at which student loans are being taken out are not sustainable for both the student and for the college institutions handing out said loans.

Besides the psychological and mental impacts of student debt, borrowers’ lives are derailed due to their loans in more ways than one. For instance, many individuals forego attending graduate school because they have simply accumulated too much debt during their undergraduate programs to now take on even more massive loans for graduate school [6]. This can be detrimental to an individual’s future, as “going to graduate school can mean the difference between a low-to-mid-range salary and being able to hob-knob with the upper crust” [6]. Master’s degrees often make a significant difference in an individual’s starting salary when they first enter the workforce, so having to forego and sometimes forget about graduate school as a possibility at all can very negatively alter a borrower’s job prospects and career trajectories. Additionally, student loan debt often results in borrowers being unable to purchase a home for extended periods of time, as many individuals will prioritize paying back their student loans over buying a home. In fact, when millennial renters were asked why they were not buying a home in 2015, “55.7% of respondents listed ‘student loan debt/not enough money saved’ as the top reason” [6]. Besides job prospects and homeownership, student loan debts also force many borrowers to put their dreams on hold to pursue careers with salaries that will allow for them to pay back their loans [6]. College should not only be providing students with the opportunity to discover what it is that they are passionate about, but also allow them to actually pursue their passions after graduation. Student loan debts turn what once seemed like a possible and tangible reality into a distant and unattainable dream.

Action undoubtedly needs to be taken to reform our current systems and allow for more fair, equitable, and affordable processes when it comes to the pursuit of a higher education. As was stated by J Geiman from The Center for Law and Social Policy, “This stress cannot be therapized away. We need real relief in the form of widespread student loan forgiveness” [4]. While the Biden administration has already canceled $9.5 billion in student loans for disabled borrowers, student loan debt relief should take on more widespread forms, fostering the creation of programs that consistently cancel debt for most if not all borrowers. This is where Congress needs to step in. President Biden has vocalized his willingness to cancel more student loans if Congress were able to reach a bipartisan agreement about the matter [2]. We as constituents need to put increased pressure on Congress to introduce and pass legislation that is centered around widespread student loan forgiveness. Additionally, Congress should pass legislation that would increase the amount of funding public universities would receive from state and local governments. Pursuing higher education should be opening doors and opportunities for graduates – instead, it is primarily serving to trap them in neverending debt cycles, leaving many with no choice but to prioritize repaying these loans over their own passions. The issue of student loan debt needs to be placed at the forefront of more conversations in the U.S. if we wish to successfully restructure our society into one that prioritizes the health, well-being, and happiness of current, former, and prospective students.