The Russia-Ukraine Conflict and the Consequence of Broken Border Sanctity 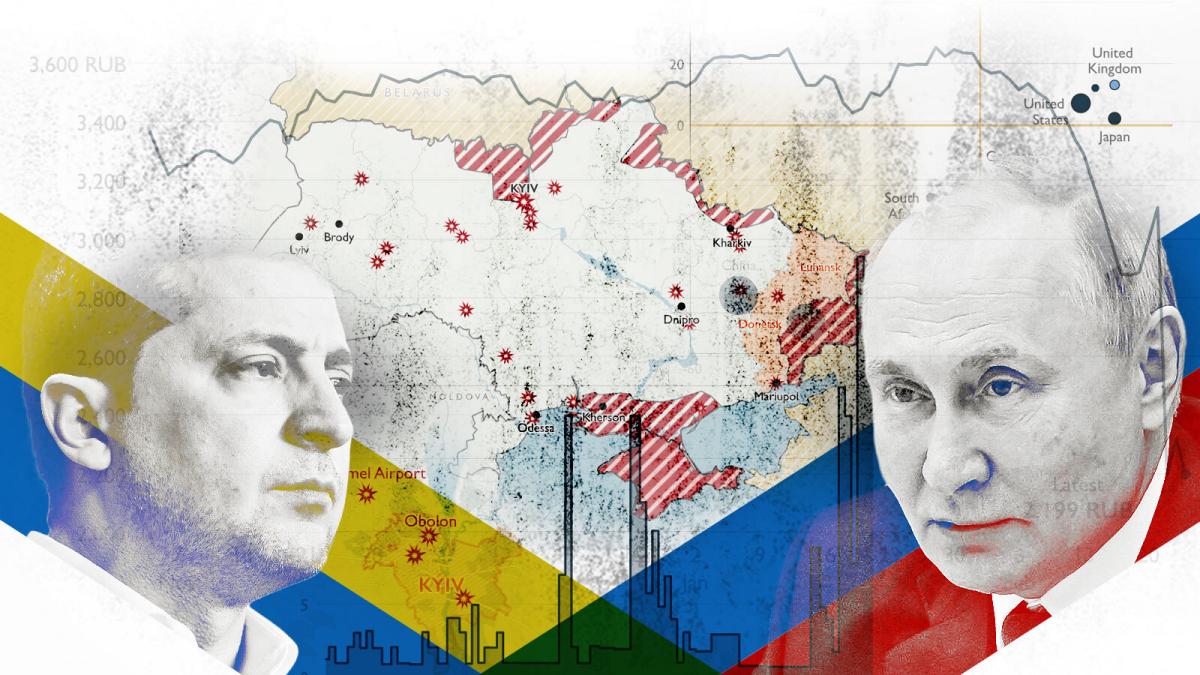 One of the most pressing international issues in today’s world is the ongoing conflict between Russia and Ukraine and the subsequent destruction of the international norms of conquest and border sovereignty. The blatant attempt by Russia to disregard Ukraine's authority and storm the country’s borders disrupts the decades-long status quo of state sovereignty upheld within the international community. It has been 30 years since another country outwardly invaded another, with Iraq's invasion of Kuwait. This conflict, however, resulted in the precedent of respecting border sanctity amongst nations. Russia’s unwarranted invasion of Ukraine marks a shift towards the antiquated practice of territorial conquest by aggressively toppling the international norm of border sanctity and potentially ushering in an age of modern imperialism.

At the conclusion of the Second World War, the international political organization collapsed into chaos. World order was quickly established through three central norms stemming from a then-recently introduced United Nations Charter: equal sovereignty of nation-states, maintenance of pre-existing borders, and proficiency in domestic jurisdiction. Succeeding world organizations in the years following the war stressed the importance of territorial integrity, particularly emphasizing the fact that this integrity required both provincial preservation and sovereignty to ensure political independence. The United Nations’ focus on decolonization came with the coupling of territorial integrity and national sovereignty; this norm was continuously reinforced with the creation of new nations after the fall of imperialism and colonization. While subject to the arbitrary nature of politics and the deep roots of history, borders remain the thin layer of glue holding the world’s political stability together.

To understand the implications of challenges to the norm of border sanctity, one must understand the different interpretations of national sovereignty and the consequences regarding the many interpretations of its definition. As suggested by Michael Walzer in his book Just and Unjust Wars, contestation of borders and intervention in regard to threatened state sovereignty stem from a communal desire for “national liberation,” intervention to protect attacked borders, and severe violations of human rights. Walzer claims that in condemning the rules of traditional sovereignty under these reasons, states “uphold the values of individual life and communal liberty of which sovereignty itself is merely an expression.” Walzer’s argument focuses on the understanding of sovereignty from the perspective of its saliency when challenged, often under the ambiguity of Article 51 of the UN Charter and its allowance for self-defense in light of the attack. Jieli Li argues that the instability of territorial borders directly correlates to state fragmentation under the fall of a state’s political power. Li states that the world political structure acts as a “network of competing states driven by relentless pursuit of power-prestige status and resource acquisition.” His rhetoric suggests that states act as “war machines” to achieve legitimacy both domestically and abroad; as a result, a nation’s political governance ties to its ability to conduct conflict and translates into its legitimacy to rule itself. These opinions reflect just two of the dozens of interpretations of state sovereignty, wherein lies the question of how countries respect the international norm of territorial integrity given the various loopholes surrounding the norm’s recent decline.

In the years since the UN Charter was signed, there is no doubt that this norm has been contested numerous times. Given the ambivalent nature of regimes such as the Soviet Union and the political consequences of ethnic conflicts such as the one that dissolved Yugoslavia, it is unsurprising that territorial integrity was challenged. Dr. Jack Kalpakian of Al Akhawayn University insists that intervention on behalf of humanitarian violations is tearing down this norm as many nations use the excuse to involve themselves in border disputes and other states’ conflicts. Argentinian-American scholar Fernando Tesón warned of the risks of the humanitarian approach to intervention, stating that the international legal framework had failed to make important distinctions in “direct intent versus oblique intent, foreseen versus willed action, intention versus motive.” Without a distinct standard as codified by international law, humanitarian intervention can be manipulated into policies used by states with imperious intentions. Further, “the responsibility to protect” doctrine empowers nations of prestige to step into countries they deem in need of saving, blurring the lines between acts of humanitarianism and disregard for national sovereignty. The report ratified by the UN General Assembly during the 2005 World Summit serves to further exacerbate the problem. Paragraph 138 of the document holds that states have a responsibility to protect their populations from “genocide, war crimes, ethnic cleansing and crimes against humanity…through appropriate and necessary means.” The ambiguous nature of the term “populations” leads to many interpretations as to who that includes, with some nations taking this to encompass those outside their borders bonded through ethnic or religious ties – such is the nature of Russia’s attack on Ukraine. This initial breakdown of territorial integrity is how Russia is further contributing to the destruction of the norm and initiating a modern age of conquest.

On March 18, 2014, Russia annexed and absorbed the region of Crimea from Ukraine in the first “forcible incorporation” of a European territory across national borders since the conclusion of World War II. It was viewed as the first of many Russian transgressions of the strict conventions upheld by international law involving territorial integrity. Russia argued that its involvement in the region was due to the “need to protect human rights of Russian citizens and ‘compatriots’” in what they saw as an “anti-constitutional seizure of power by anti-Russian groups in Kiev.” With this proclamation, the Russian regime legitimized its interference by abusing the humanitarian approach and invoking the protections of the 2005 World Summit that allowed the responsibility to protect doctrine. Nothing of any substance was accomplished with attempts to annex Crimea; 8 years later, Putin is making similar claims as justification for his latest invasion of Ukraine. Putin makes his case for war by claiming NATO expansion into Ukraine as “a very real threat to our interests but to the very existence of our state and to its sovereignty.” Putin iterates a long list of Western aggressions that have consistently threatened his nation’s integrity, citing Kosovo’s independence, American invasions in the Middle East, and Western support of mercenaries in Chechnya as examples of conflicts meant to weaken Russia. He further claims that Western culture that has been aggressively imposed within their countries are “attitudes that are directly leading to degradation and degeneration” upon the Russian people. Most chilling of all Putin’s accusations is his claim of the “genocide of the millions of people…who pinned their hopes on Russia” by Ukraine and his intent to de-Nazify the region.

It is clear that Putin has made resourceful use of the approach that threatens to topple the international norm of border sanctity and have world order collapse. His comments on the protection of his people from both genocide and humanitarian crimes play the mitigation of protection of the population in Paragraph 139 of the 2005 World Summit Order, which gives the Security Council authority on a case-by-case basis of particular threats. His reasoning is based upon what he and his regime view as a threat to their nation’s sovereignty, manipulating the foundational beliefs of the UN charter and claiming self-defense. However, this is more a reflection of the failures of international institutions and their lack of clarification on upholding border sanctity in light of the ethnic conflict, self-defense claims, and other various motifs. Putin’s exploitation of the system is merely an example of the decades-long breakdown of the international norm of territorial integrity, with his invasion of Ukraine barely holding back the dam of border disputes across the globe.

The conquest initiated by Russia is reminiscent of the tense atmosphere gracing the world stage before World War II during Germany’s unprovoked invasion and subsequent annexation of Czechoslovakia. Should the international community neglect Ukraine while Russia pursues this invasion, other countries may be incentivized to dispute borders and instigate conflicts, which may see a renewed period of conquest and empires. This risks the phenomenon of states’ extinction as other nations challenge the sanctity of their bordering states’ legitimacy. The ensuing consequences, particularly amongst nations already on the brink of war, would ensure an outbreak of worldwide conflict depending on the nature of each border dispute. Should Russia seize Ukraine without any significant physical interference from the global community, what is to stop them from further invading other nations bordering their western territories? This renewed interest in broken border sanctity is not unknown across other parts of the world. To this day, Palestine and Israel remain locked in deadly combat over disputed territories while China presses its disputed claims over Taiwan. Russia has ignited a spark of invasions that threatens to burn down the very international norms holding together the thin bonds of peace between nation-states.

Given the variability of many of the world’s border conflicts in the past, it is difficult to predict the exact impact Russia’s breach of Ukraine will have on other nations looking to capitalize upon a similar opportunity. However, given Russia’s prominence and influence as a global “superpower,” the risk of a new international norm should be given top priority, especially with the pressing concerns of another potential arms race. The decline of territorial integrity has only worsened with Russia’s invasion of Ukraine amidst the failures of the international organizations’ resolutions, threatening a near collapse of the entire system of state sovereignty and border sanctity.