The Rising Importance of PSMCs and Russia's Growing Influence in Africa 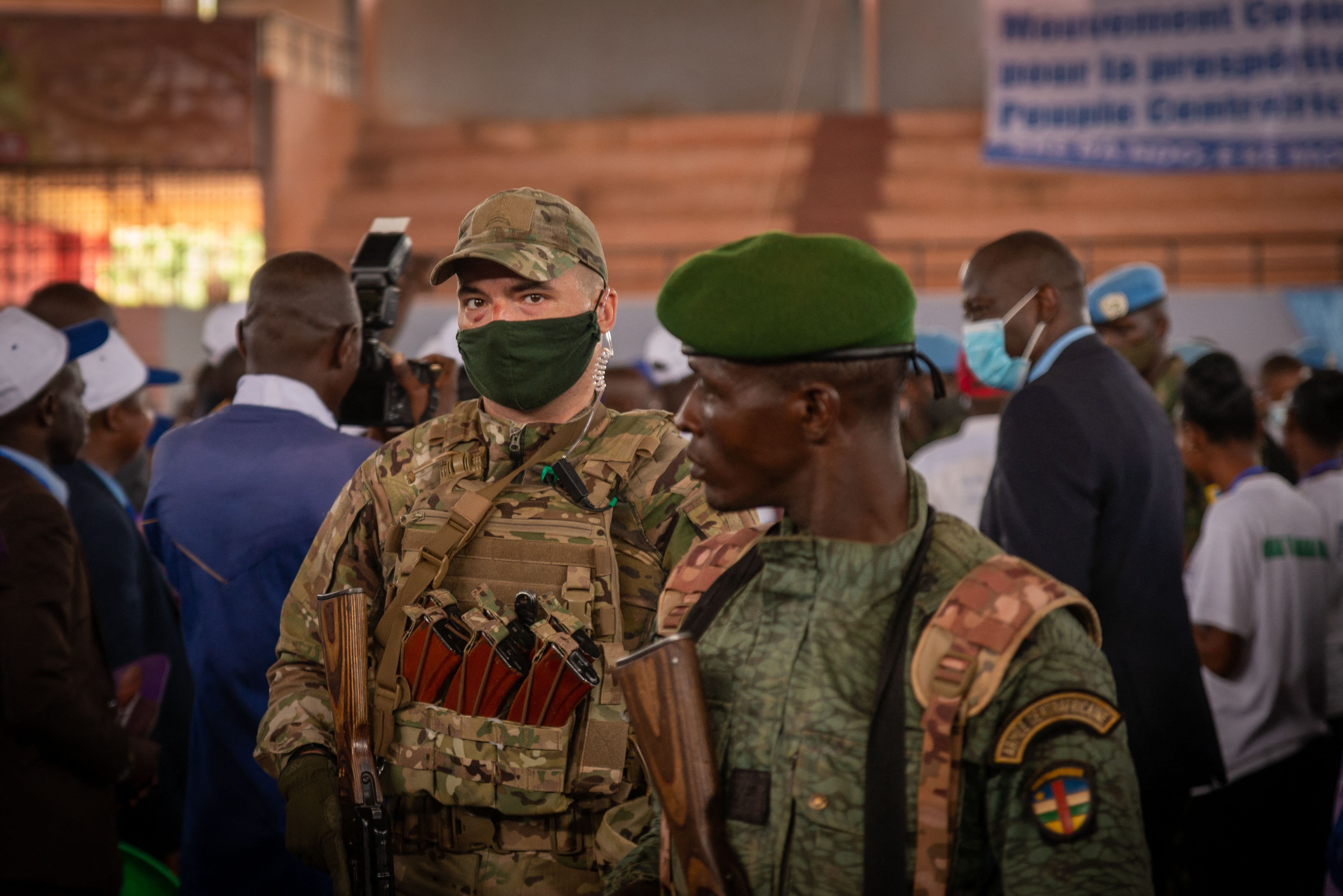 Russia has been steadily gaining strategic footing in Africa. This involvement marks a departure from Moscow’s traditional guarded stance vis-à-vis the African continent, where it had historically privileged economic cooperation and technical assistance (with Algeria for instance in the 1980s). Russia’s newfound involvement in Africa is characterized by a distinctly urgent dimension, taking place around the conflicts and crises playing out in Libya and Mali since the early 2010s, and it features prominently the rising importance of private security and military companies (PSMCs) – thus posing an important challenge to state-building and transitions to democracy in the region.

Military interventionism in Africa is more often associated with France, in light of the latter’s colonial legacy in West and North Africa. French military interventionism has been regular and has greatly impacted its former colonies which it continues to influence in manifold ways. By one account, France has intervened militarily over fifty times in Africa since decolonization [1]. In unleashing such interventionism, the French have actively sought to maintain African political orders favorable to French interests. Such interests are diverse and change over time depending on the successive French administrations but generally include the promotion of French language (Francophonie) and culture, business interests, investment opportunities, and the overall maintenance of regimes that are supportive of French diplomacy. The close ties between Paris and the leaders of these countries has given rise to what has been described as “Françafrique”, a controversial tight relationship of ‘backyard’ influence built on unofficial and often corrupt arrangements amongst various Franco-African political, economic and military networks [2].

Whereas other major powers havehad also intervened in limited ways – notably the United Kingdom in Sierra Leone in the 1990s, and the United States across the Sahel and East Africa in the aftermath of the September 11, 2001 terrorist attacks – Russia had not been present until recently. The current incorporation of Russia in the intervention game in Africa is arguably aimed at contesting and weakening Western footprints in Africa. The substance and form of this strategy raise unresolved questions for African security and for the international community in light of President Vladimir Putin’s authoritarianism and militarism.

As noted, Russia’s presence in Africa challenges the existing regional balance of power and the French domination – a domination that had been strengthened in the 2000s and with the French interventions in Ivory Coast in 2004 and in 2011, in Mali in 2012, and in the Central African Republic in 2013, and which has also grown more and more contested by local officialdom and civil society. While the Soviet Union has had some involvements across the continent during the Cold War, as that era was not solely about the front stage in Moscow and Washington DC, but also about how both superpowers went to great lengths to get countries in Africa to align themselves diplomatically with the respective Eastern or Western political blocs. Importantly, since the fall of Communism, there has never been any direct intervention or notable military involvement in Africa of, or even on behalf of, the Russian Federation.

The crucial aspect of Russia’s newfound growing influence in Africa is that it is taking the form not of Russian troops dispatched by Moscow or technical advisers positioned within the ranks of African militaries but of private paramilitary contractors, so-called corporate soldiers [3]. To the extent that these firms have reportedly close links with the Russian state, it is possible to consider their involvement as part of Russia’s policy and strategy towards Africa. More generally, we are witnessing a growing trend and influence of private security military contractors and contractor groups – best illustrated by the case of the firm Blackwater [4] – that are intervening on their nation’s behalf so as to further their foreign policy aims [5]. To be certain, mercenaries have long history of involvement in wars. The notion of private citizens going to export violence on behalf of the state was indeed particularly popular in the Middle Ages. One of the countries that used to export the most mercenaries was Switzerland. The Reisläufer, as they were then known, were notable for their service in foreign armies and it was common practice to recruit these medieval mercenaries into special military units. However, as the centuries went on and as the military function became state-centered, the practice of employing mercenaries persisted but acquired a more concealed aspect. Whereas “the armies of Rome and Byzantium, of Carthage and Persia, of the Emperor Charles V, of Napoleon… [and] of both the French and British colonial empires”[6] all employed mercenaries, there was a period of decline of this role as technological, strategic and organizational military advances and capabilities counteracted the advantages brought about by mercenaries.

This trend was born anew in a salient manner in the 2000s with the emergence of Blackwater (now known as Xe Services/Academi), the American global firm (now registered in the United Arab Emirates) set up by Erik Prince [7]. Through its involvement in Iraq, Afghanistan, and Yemen, Blackwater brought about a modern possibility for states to use these security actors while denying accountability and liability – all whilst furthering their foreign policy aims. The possibility to deploy PSMCs rather than the regular state military also allows for a more violent approach to interventionism as seen in the case of the 2007 Nisour square massacre in Baghdad when Blackwater mercenaries shot at dozens of civilians, killing seventeen and injuring twenty.

It is this very combination of ways and aims perfected by American firms (Blackwater but also CACI and TITAN) in the early twenty-first century that Russia is currently deploying in Africa. In the case of Russia today, it is the Wagner Group which has been becoming increasingly influential. Wagner is an unofficial private security company whose leadership positions are occupied by men who hold direct and personal links to Vladimir Putin, notably Yevgeny Prigozhin.  This organization has, so far, reportedly been active in several countries in Africa. In  Libya, the group sought to influence local elections and gather intelligence on military operations led by the interim Libyan Government of National Accord. In the Central African Republic, Wagner was tasked with protecting mines and supporting the ruling regime; and, similarly, in Sudan where it provided support for the autocrat Omar al Bashir whom the international court of justice has had an arrest warrant for since 2009 for crimes against humanity. In Mozambique, the group led operations against armed groups affiliated with the Islamic State in the province of Cabo Delgado, an area known for its rich natural gas deposits. In Angola, Wagner has been present to provide security for the Russian diamond company Alrosa on mining sites it is manning. Finally, in Madagascar and in Zimbabwe, the firm has developed large scale communication campaigns and lobbying propaganda efforts during the respective countries most recent presidential elections [8]. Beyond Africa, the group was hired by Syria’s state-owned General Petroleum Corporation to capture and secure gas and oil fields from the Islamic State and were reportedly remunerated 25% of the proceeds.

Wagner’s most significant advance in Africa has been in Mali – a country going through significant political instability and insecurity since April 2012 following the near-simultaneous fall of the Amadou Toumani Touré regime as a result of a military coup, the capture of large swathes of the country’s northern region by Al Qaeda in the Islamic Maghreb (AQIM) and affiliated groups (such as Ansar al Din), and the neighboring instability due to the onset of the Libyan civil war. In August 2020 and May 2021, a second and third coup deepened the crisis. In September 2021, the new Malian military regime extended an invitation to Wagner to come provide technical security assistance. This was a watershed moment as it indicated a marked departure from the traditional Malian, and African, requests of support to France. In February 2022, the Malian authorities went further and asked the French government to withdraw all troops that Paris had dispatched to Mali since 2012 as part of the Serval Operation, subsequently replaced by Operation Barkhane – some 5,000 French soldiers positioned across Mali. This took place amidst a diplomatic row with Mali expelling the French ambassador in early February 2022.

The Malian authorities' decision is particularly consequential. In particular, the weakness of Mali’s military forces and lack of modern equipment has created a significant power vacuum. The neocolonial style of the French troops, resented by many in the country, paved the way for Mali’s security actors to seek an alternative to the French scenario. The Wagner Group’s global credentials and promise of efficiency appeared appealing to Mali’s junta as it was experiencing political pressure from the international community and isolation from its West African and Sahelian neighbors. The Wagner Group has been welcomed in by Mali’s ruling elite. The group, which visibly seeks out business opportunities in places of political instability, has, so far, been brought in to train the military and has taken on important security responsibilities.

The advance of Russia in Africa and in the Sahel particularly has been successful. It has placed pressure on France, in its own backyard, and has allowed Russia to expand its realm of influence in a key part of the continent where Europeans and Americans had been active. The Wagner Group took advantage of the power vacuum and strong wave of anti-French sentiment, riding that wave to offer the same services they provided in the other politically-unstable countries in which they have operated and whose myriad divisions they have exploited. In that regard, Putin’s victory in Mali is no small security story. Putin is learning that he can apply pressure in different regions across the world by deploying these mercenaries/PSMCs and benefiting from the ‘plausible deniability’ due to the Russian state’s lack of formal/official involvement. He did so in Syria against the United States and it worked as Bashar al-Assad’s regime survived and he has now achieved the same feat in Mali against France. All of which were ahead of Ukraine’s invasion.

A larger lesson for international affairs is that leaders such as Putin are realizing that an appealing approach to contemporary armed violence management, including internationally, is deploying private military security contractors. These newly-empowered actors are an effective way to reduce economic costs, personnel casualties, and political commitments and are easier to handle due to their non-state nature. Ultimately, Russia’s involvement in African geopolitics has also altered the nature of the politics of interventionism and poses a fresh challenge to transitions to democracy as these PSMCs have often been found to violate human rights, indulge corruption, exacerbate tensions, and generally impede rather than facilitate political transitions.