The 2019 Hong Kong Protests Through A Realist Lens 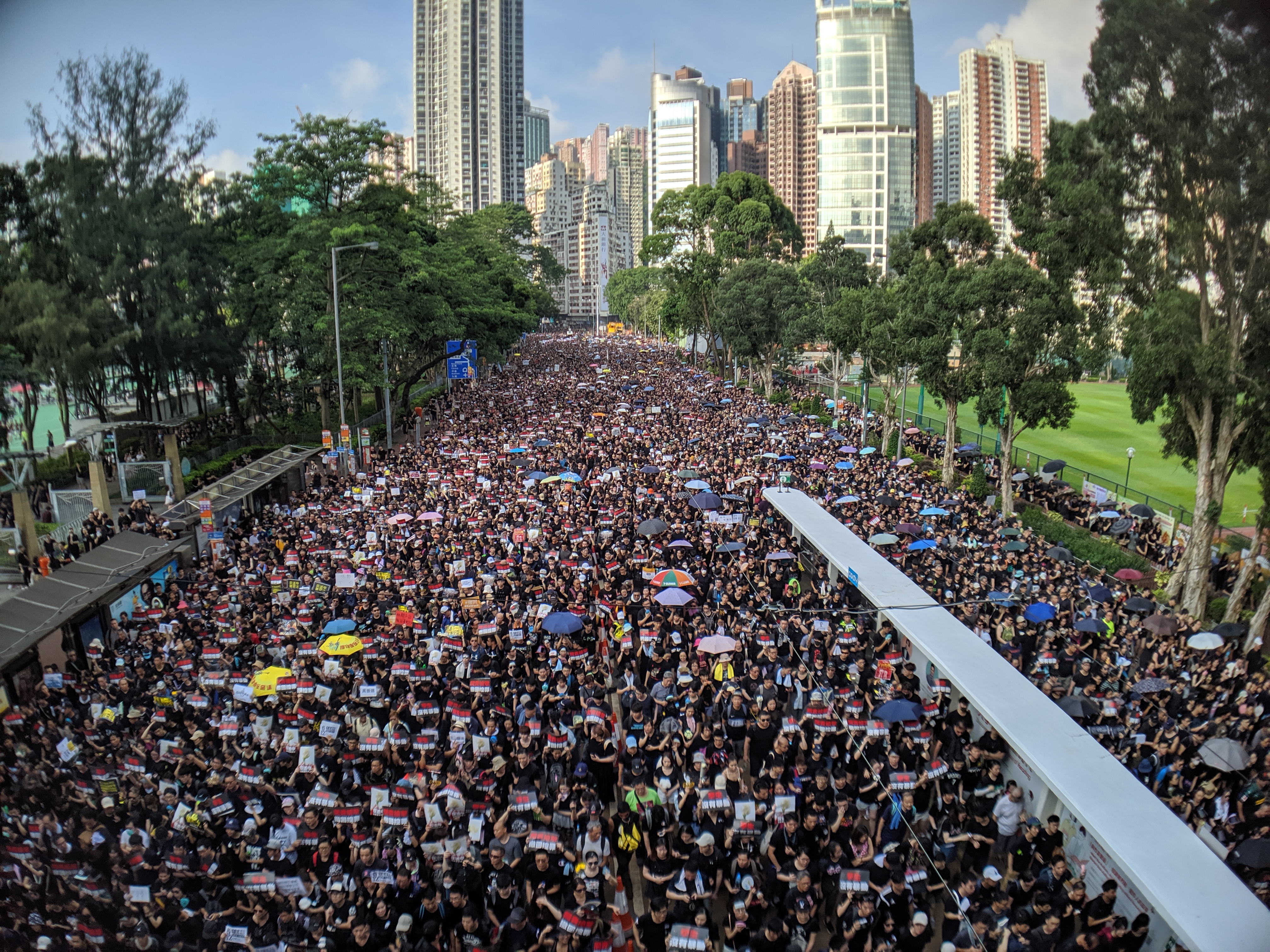 In 2019, the Hong Kong protests against the extradition bill captured worldwide media attention. The Hong Kong government proposed a bill that would allow China to exert greater control over Hong Kong’s autonomy and democratic government order. As a response, Hong Kongers took to the streets with five demands to Chief Executive, Carrie Lam, which contributed to Hong Kong’s growing social movement against China. Over the course of six months, only one demand received a solution as Lam officially withdrew the extradition bill. Nevertheless, as Hong Kong’s expiration date on their semi-autonomy in 2047 draws near, tensions between Hong Kong and China remain heightened and continue to grow.

The 2019 Hong Kong protests were not Hong Kong’s first protest against China’s influence but were the largest to date. At its peak, the large scale protests attracted nearly two million people for four months as the entire world watched.[1] The protests sparked after a proposed extradition bill. This bill’s enactment would allow Hong Kong citizens to be charged with crimes in Hong Kong, but tried in China, under its respective legal system. As a result, a massive uproar erupted among Hong Kongers as they viewed the bill as China’s attempt to encroach their authoritarian agenda on Hong Kong’s rights and freedom. This issue stems from China’s complicated relationship and systematic rule over Hong Kong under its one country, two systems policy.[2] In international affairs, the China-Hong Kong relationship can be viewed through realism. Realism is a theory that defines countries as self-interested and focused on their relative power through conflict. The Hong Kong protests can be best described through the realism framework as Hong Kong acted its national self-interest and survival against China.

Hong Kong has always been under the control of others, perpetuating it into a constant state of survival. Historically, Hong Kong has been under the rule of China’s Qin Dynasty since the third century. However, under the 1842 Treaty of Nanking, China involuntarily handed over control of Hong Kong to the British. For the next 156 years, Hong Kongers enjoyed special rights under British rule, such as a capitalist economy and freedom of speech, press, and assembly. Then, in 1997, Britain officially transferred ownership of Hong Kong back to China under the agreement policy: One Country, Two Systems. Under this system, Hong Kong functioned as a semi-autonomous region and continued to possess the same rights and lifestyle as a British colony.[3] Hong Kong was not declared independent. Instead, it was declared a part of China but operated under a vastly different political system. However, the policy was only set to last for 50 years. In 2047, Hong Kong is expected to fully integrate back into China, despite differences in government and citizen rights. Yet, China is not waiting until 2047 to begin its encroachment on Hong Kong’s government and economy.

The Hong Kong and China government’s differences highlight Hong Kong citizens’ desire to maintain their autonomy and reject China’s political influence. China is under an authoritarian, communist government where power is consolidated into a single party's hands Meanwhile, the Hong Kong government is a limited democracy that remains highly autonomous where the people have fundamental freedoms.[4] However, despite Hong Kong’s current democratic government system, the majority of Hong Kong politicians are Pro-China.Hong Kong’s governing body is called the Legislative Council, or “LegCo,” for short. Similar to the United States’ two-party system, LegCo is bi-partisan between either Pro-Democracy or Pro-China. Half of the LegCo seats are directly elected by the people, while the other half are reserved for the various industries of Hong Kong such as legal, medical, and finance.

Consequently, since many of the industries engage in business with China, they are highly incentivized to lean Pro-China instead of Pro-Democracy. To add on, the Chief Executive of Hong Kong is not directly elected by the people. The individual is chosen by the Chinese government.[5] This is one example of how despite China’s agreement with Britain to allow Hong Kong to remain autonomous, China has exercised overarching control over Hong Kong. China’s continuing attempt to exert power and influence over Hong Kong before the handover in 2047 showcases China’s realist government. China is focused on its national self-interest and absorption of power with the integration of Hong Kong, thus it does not prioritize peace negotiations or the current freedoms of Hong Kong.

The 2019 Hong Kong protests were an act of display among Hong Kong citizens against the extradition bill, but more importantly, China’s control. The situation stemmed from a murder: a Hong Kong couple traveled to Taiwan, but during their stay, the boyfriend murdered his pregnant girlfriend. He returned to Hong Kong and confessed to his crime a month later. However, the Hong Kong police could not charge him since he committed the crime in Taiwan. Simultaneously, they could not send him to be tried in Taiwan because Hong Kong and Taiwan did not have an extradition agreement. Therefore, Hong Kong proposed an extradition bill, which allowed Hong Kongers to be charged in Hong Kong, but sent to Taiwan for their trial. Yet, if the bill included Taiwan, it would also include China.[6] If the bill were to pass, which it likely would have under the current Pro-China LegCo, Hong Kongers feared that they could be falsely convicted of crimes and then sentenced under China’s legal system, which does not acknowledge the rights of Hong Kong citizens. Although the protests were in opposition to the extradition bill, they showcase the underlying tensions between Hong Kong and China and the social movement that has grown over time. Hong Kong is fighting back against China’s encroaching political agenda and attempts to establish its presence on the island. Even as a semi-autonomous region, Hong Kong draws upon realist governmental aspects such as striving for their survival and acting upon their national self-interest as their own country- independent from China.

As the civil unrest and protests continued to intensify, government officials responded with resistance towards the protests and bill removal. When Hong Kong’s current Chief Executive, Carrie Lam, first introduced the extradition bill in April 2019, she claimed that the bill would benefit Hong Kong’s public safety. Yet, pro-democracy groups already began to voice their opposition. However, as Carrie Lam continued to move forward with the bill, the opposition led to widespread protests. In early June, city-wide protests hit their peak drawing over a million people and impacting public institutions such as the LegCo building, airports, and public transportation. On June 15th, after nearly three months of protests, Carrie Lam officially announced the bill’s suspension.[7] However, by then, the political unrest was too rampant and the suspension was insufficient; protesters demanded the bill’s complete withdrawal, with no possibility of return.

Hong Kong citizens took to the streets to protest using the motto, “Five Demands, Not One Less.” The first was for the full withdrawal of the extradition bill. The second was for the public retraction of the June 2019 protests labeled as riots by the Hong Kong government and media. In Hong Kong, riots carry harsher legal consequences, punishable with up to ten years in jail. The third is the release and formal exoneration of over 6,000 arrested protesters charged from illegal assembly to arson.[8] Both the second and third demands call for decriminalization of the protests and people involved. The fourth demand is to conduct a third-party investigation into Hong Kong’s police behavior. To control the protests, the Hong Kong police used excessive force and tactics which have led to allegations of police brutality. The fifth demand is for universal suffrage of their LegCo and Chief Executive. The demands represented Hong Konger’s rise in national pride and desire for autonomy. Eventually, on September 4th, Carrie Lam officially withdrew the extradition bill, finally ceding to one of the five demands by protesters.[9] However, this did not stop the political unrest against the government, nor did it the looming expiration on the freedoms of Hong Kong.

Political tensions between Hong Kong and China have contributed to an ongoing pro-democracy social movement that began prior to the extradition bill. The first major protest against Hong Kong and China began in 2003 with Article 23 of Hong Kong Basic Law. Article 23 prohibited speaking out against China, infringing upon Hong Kong’s fundamental freedom of speech. In response, on July 1st, the Handover anniversary, half a million protesters held the region’s first political protest.[10] As a result, the government no longer moved forward with the proposal, a victory for the protesters. Later in 2014, proposed reforms to Hong Kong’s voting system triggered the Umbrella Movement. China announced they would allow Hong Kongers universal suffrage over their Chief Executive, but only from candidates pre approved by China. Hong Kongers viewed the reform as a way for China to hold more political power in Hong Kong, arguing that the reform was sold as a “fake-democracy.”[11] For four months, protesters occupied the main streets surrounding government buildings that caused tremendous traffic and rose tensions between the Hong Kong people and police. Ultimately, the government did not make any political concessions but decided not to enact electoral reforms.[12] Protesters claimed they would return. Hong Kong’s history of social movements showcases their uprise in its political power. Hong Kong is not attempting to obtain power through negotiation or collaboration, but instead through demonstrations of assembly against the government.

The 2019 Hong Kong protests proved to the world that Hong Kong has a voice. The people performed massive demonstrations of political uprising in an attempt to reclaim their country. Despite LegCo being majority Pro-China, Hong Kongers continue to fight for their democracy, evident by their success with the extradition bill’s withdrawal. Absorbed in their national self-interest and pride, Hong Kong’s social movement and protests can be analyzed through realism as the region battles for its power and survival. They will stand and fight for Hong Kong until the end.