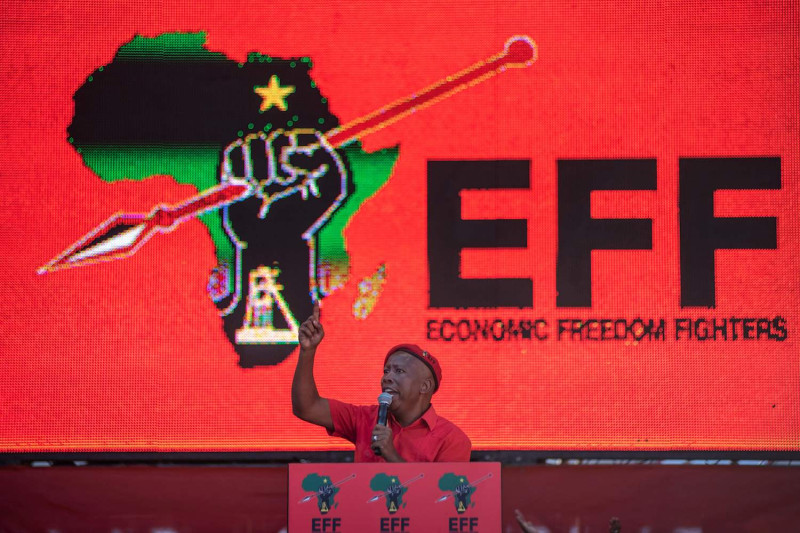 In 1994, South Africa held its first election with universal suffrage, allowing all adult South African citizens to vote regardless of their race. The election results dramatically changed the composition of South Africa’s government, with the African National Congress (ANC), which was previously banned from participating in South African elections, obtaining 62.65% of the national vote and 252 out of 400 seats in the lower house of the national legislature. A new constitution was soon written, marking the end of apartheid in South Africa, a system of institutionalized segregation that allowed the White Afrikaans minority to politically, socially, and economically dominate the country, with the ANC remaining as the dominant political party in the South African legislature ever since the 1994 parliamentary election. It seemed that despite all of the challenges it took to create this new democracy, South Africa was poised for success.

“Never, never, and never again shall it be that this beautiful land will again experience the oppression of one by another and suffer the indignity of being the skunk of the world.”

However, a new threat has emerged to question the stability of South Africa’s democracy. Since the election of 1994, numerous corruption scandals have plagued high ranking ANC members, shaking the public’s confidence in their government. Almost no South African political party has had the strength to challenge the ANC since their rise to power, making them appear to be the only viable political party. The ANC’s election dominance and apparent immunity to voter accountability has also caused the South African youth to become apathetic towards the South African political system. If this trend continues, the once promising future of South Africa’s democracy could be in peril.

History of the African National Congress(ANC)

The ANC was founded in 1912 while South Africans were living in apartheid. They created a platform that sought to enfranchise all citizens of South Africa regardless of their race, bringing them into conflict with the white South African regime. The ANC was subsequently banned from participating in South African elections from 1960-1990, but that did not stop the party from fighting for universal suffrage. Members of the ANC used a combination of both peaceful and violent protests in an effort to sabotage the South African government and make it clear that they would not stand for the regime’s oppression. Their efforts inspired people of all races in South Africa, causing students to protest, workers to go on strike, and uprisings across the country.

The ANC’s leadership in the battle against apartheid made them very popular with all people of color in South Africa. After their ban from participating in national elections was lifted, the ANC won over 57.5% of the national vote in the next 5 South African parliamentary elections. However, despite what their popularity would suggest, the ANC controlled government has been far from perfect since it took office. The party has been notorious for their corruption scandals, and they have only recently started to face repercussions for their actions.

Corruption Scandals of the ANC

In 1999, South Africa engaged in an arms deal with the French arms company Thales to strengthen their military, costing South Africa 30 billion rand. Months after the deal, investigations began on the suspicion that Thales had bribed ANC officials to prevent them from being investigated while the deal was taking place, which was later confirmed to be accurate. It was also found that the financial advisor to former deputy president Jacob Zuma, the second highest official in the South African government, had taken a bribe on Zuma’s behalf and was sentenced in 2005. The ANC’s parliamentary whip was also found to have taken a bribe from one of the firms competing against Thales for South Africa’s arms contract, and was sentenced in 2006. Other high ranking ANC officials have also been suspected of bribery from this deal, including former president Thabo Mbeki, and the former Minister of Post, Telecommunications, and Broadcasting Jay Naidoo. However, they were never charged for these crimes.

Shortly after these revelations, the ANC’s higher ranking members began a massive coverup and used the government’s resources to do so. The government organization in charge of investigating and countering corruption in South Africa, the Scorpions, had been gathering evidence on Zuma’s involvement in the arms deal since investigations first began. However, after Zuma had obtained the presidency in 2008, the ANC controlled National Assembly dissolved the Scorpions. This led to the withdrawal of all corruption charges against Zuma in 2009, and has since become one of the largest political scandals in South African history. A new organization, the Hawks, was created to replace the Scorpions and continue the investigation. However they were under the direction of Zuma’s cabinet rather than acting as an independent organization like the Scorpions did. This made the ANC practically immune to further government investigations, allowing their misdeeds to go unpunished. It was only until 2018, after Zuma was given a vote of no confidence by the South African parliament, that the charges of corruption were brought up again.

The 1999 arms deal scandal was just one example of the ANC’s extensive history of corruption. Countries in the Middle East such as Saudi Arabia have donated to the ANC to try and influence their policy decisions. In 2009, an embezzlement scandal caught the attention of the public when Jacob Zuma used public funds to upgrade his private residence for his own leisure, which was a violation of South African law. It took seven years for this matter to be tried in the Constitutional Court, where Zuma and the National Assembly faced minimal repercussions despite trying to withhold evidence and prevent the investigation from occurring. Despite the well documented evidence of corruption, the ANC has continued to find widespread support among South Africans and win a majority of seats in the National Assembly, creating the appearance that this party is seemingly immune to voter accountability.

Effect on the South African Voters

The lack of repercussions the ANC has faced for their actions, such as losing seats in the National Assembly due to voter frustration and facing criminal charges for their actions, has had a large impact on voter turnout rates in South African elections. The South Africans that grew up after apartheid ended, known as the “Born Frees,” have only seen this current iteration of South Africa’s government. After experiencing the constant corruption scandals and empty promises of ANC leaders, the youth of South Africa have become disillusioned with the political process. 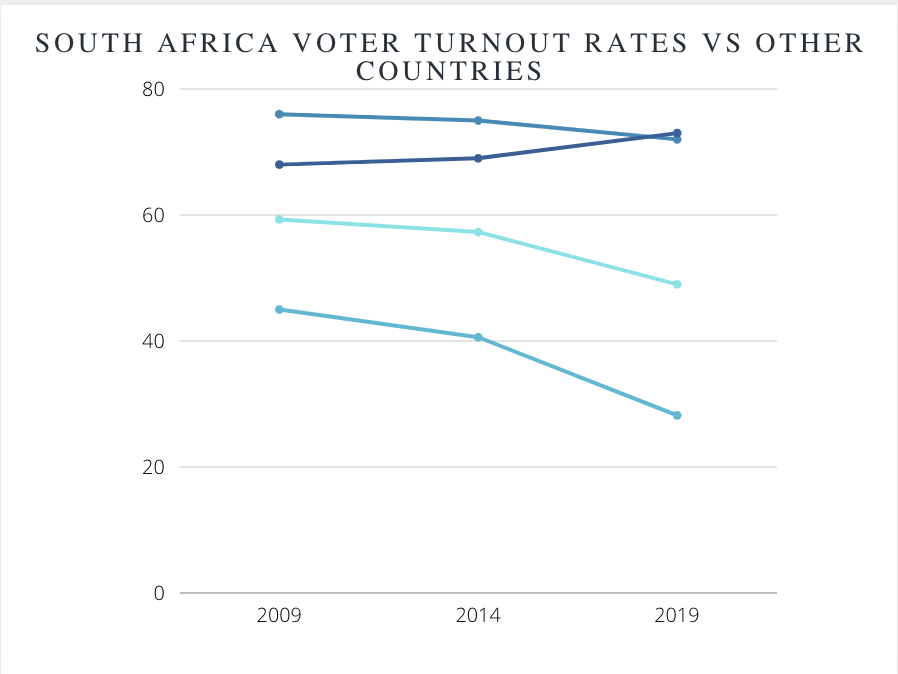 Some of this decline can be explained by typical factors that deflate voter turnout rates. The ANC’s recent electoral dominance has made South African elections less competitive, which in turn decreases voter turnout rates. There are two main reasons for this electoral dominance. The first is that since the ANC originally fought for the enfranchisement of all South Africans, they have gained a strong core base despite the many corruption scandals, which helps insulate them from criticism and accountability. The second reason is that the competing political parties have not shown that they are capable of winning enough seats in the National Assembly from the ANC to be viable political alternatives. This is similar to how third parties are seen in the United States, however in South Africa it is as if every other political party is a third party option compared to the ANC.

However, another reason that South African voters, particularly the “Born Frees”, aren’t interested in voting is that they feel that their vote will have no impact on the choices that their government will make. This does not mean that the South Africa youth are not politically active, only that they believe voting is not the best way for them to enact change in the country.

“You vote for someone, and at the end of the day nothing changes.”

“The rot in this country goes so deep, it’s hard to believe voting will change it.”

The main problem associated with low voter turnout is that groups who do vote are disproportionately overrepresented in the elected government and the policies chosen by the elected government. For countries with low voter turnout, citizens with high socioeconomic status are usually the group that votes the most often. There is substantial income inequality among many South Africans, with South Africa’s poverty rate standing at 55.5%. If South Africa follows the same trend as other countries with low turnout rates, the interests of the wealthy will outweigh the interests of South Africa’s poor, which constitutes the majority of the population.

South Africa’s democracy is still very young, and its problems can be fixed overtime. The ANC lost some of their core support in 2013, after a section of their party broke off and formed the Economic Freedom Fighter Party (EFF), increasing the possibility that the ANC could lose their majority in the National Assembly after the next election. However, if these problems are not remedied and the people continue to lose faith in the effectiveness of their government, South Africa could quickly be back in the same position of uncertainty about the future that it was before 1994.