Policing From the Streets and Into Californian Classrooms: Fueling the School to Prison Pipeline 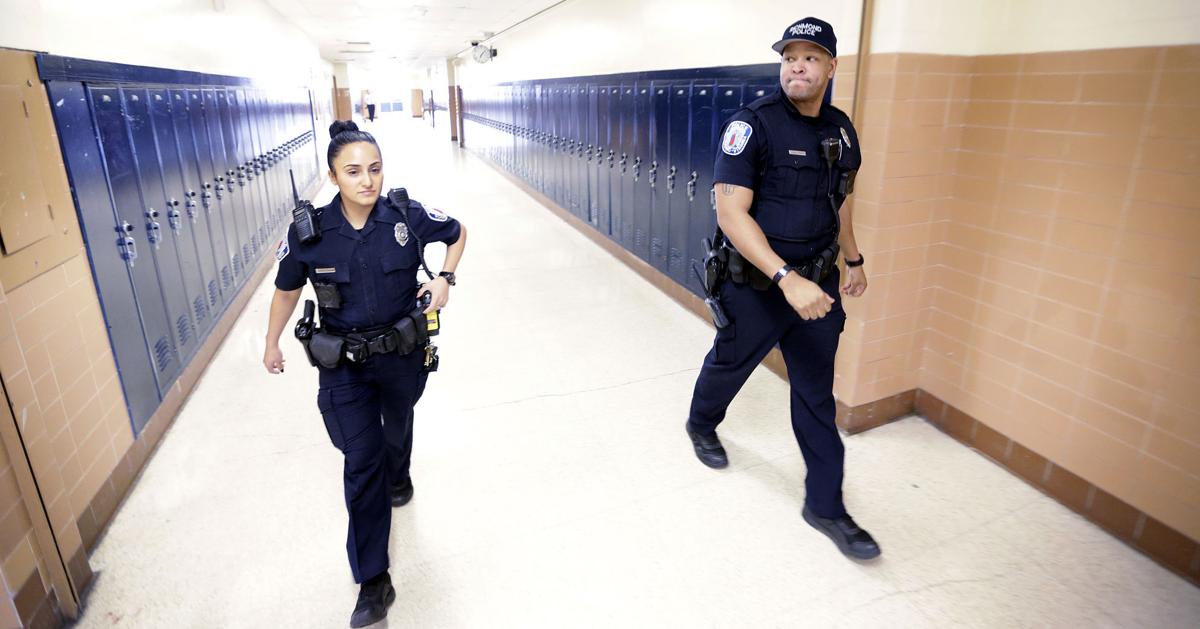 Since the infamous Columbine High School massacre of 1999, school board members and anxiety-ridden parents have sought to prevent such an atrocious act of violence from recurring. Consequently, in succeeding years the number of school resource officers (SROs) have skyrocketed across the nation in hopes of deterring an unhinged student from becoming every parent’s worst nightmare: a school shooter. Despite data that shows a lack of disparity between gun access and bullying rates among ethnicity or gender, mass school shootings are almost unreservedly perpetrated by white males (Everytown Research & Policy 2021). In order to intercept the deadliest threat to school safety, the rate of SROs policing predominantly white school districts in proportion to predominantly nonwhite school districts is – lower? Statistics illuminate the heightened imposition of SROs in schools with higher Brown and Black student populations and demands an investigation regarding the effects and intentions of law enforcement activity on campus. By analyzing the consequences of SRO presence for historically disenfranchised groups, readers can grasp why California school boards must opt to terminate their contracts with local police departments and keep SROs off campus. The financial support and facilitation of non-threatening school safety alternatives will seismically impact the future of marginalized students, helping reverse major statewide issues for generations to come.

Following the tragic Sandy Hook Elementary School shooting in 2012, the Obama Administration catapulted an extra $45 million in funding toward SROs, permeating an exceedingly high number of law enforcement officers on school grounds across the nation. Yet, research illuminates SRO presence fosters results antithetical to student benefit. A multitude of studies show that their presence does not stunt the rates of on campus assault, possession of drugs or alcohol, or even mass shootings (Anderson 2018). Interestingly, when a law enforcement officer accedes to an on-campus position, aggressive policing directed at Black and Brown individuals follows students from the streets into the classrooms. A study involving 73 SROs among two different school districts revealed that SROs policing the district with a chiefly white student population were mainly concerned with intruder-based and environment-based threats, while “SROs in the district with a larger proportion of Black students were primarily concerned with students themselves as threats” (Fisher et al. 2020). The grim reality is—whether consciously or subconsciously—SROs target Black and Brown K-12 students. Consequently, students of an ethnic minority group are more likely to suffer an acute sense of anxiety, stress, and fear throughout their public education experience (Nayeb & Meek 2020). Understandably, considering the average SRO is a 48-year-old white male who is armed with: a firearm, taser, handcuffs, and mace (Lee & Hayes 2020). The psychological effects of this alone reap disastrous academic consequences for impacted children. Heightened levels of stress or fear may induce lower feelings of school connectedness, below average grades, and higher rates of expulsion and suspension (American Educational Research Association [AERA] 2013). Such results elevate the risk of minority youth becoming gang affiliated and decrease their likelihood of pursuing higher education. SRO activity directly feeds the school-to-prison pipeline, causing lifelong consequences for minority student populations due to carceral grooming through the exercise of overly harsh, punitive measures against these students. Like instances beyond school campuses, SROs weaponize the ability to act as the judge and jury, allowing them to execute whatever punishment or discipline against Black and Brown schoolchildren that they see fit.

So, why are SROs increasingly abundant in urban schools composed of predominantly black and brown students when mass school shootings are committed almost exclusively by white males who attend suburban schools with predominantly white students? Studies highlight that Latino and Black high schoolers “are roughly 14% and 16% more likely to attend an SRO school than whites, respectively” (Lee & Hayes 2020). The swelling police presence in urban rather than suburban schools verifies that the implementation of SROs is not a reflection of violence on school campuses, considering the deadliest threat to student safety is mass shootings. It is a reflection of school board members displacing their own biases onto urban school children. However, prevailing consequences of school policing goes beyond racial targeting; other groups become collateral damage in this process, as well. Research shows that female identifying students, students of low socioeconomic status, and students who experience violence—a significant portion of the LGBTQ+ youth community—encounter similar adverse ramifications when law enforcement patrols school campuses. Horrifically, the number one reason SROs are arrested pertains to sex-related crimes with female school children. Coupled with the fact that non-gender conforming students experience a much higher probability of being disciplined, suspended, expelled, and arrested by on-campus law enforcement, begs for outrage from parent groups (Kohlenberg & Meek 2020). There are staggering amounts of children from ranging demographics who may suffer detrimental, long term consequences from school resource officer imposition. Displacing their own biases, SROs actively target all outgroups of students at higher rates. Essentially, they are armed bullies with the legal ability to make arrests. Abolishing SRO presence in K-12 public education will permeate a dramatically more equitable academic culture for a multitude of student groups, alleviating an abundance of systemic statewide issues. Modifying what school safety looks like on school campuses will allow female-identifying, LGBTQ+, and ethnic minority youth to better flourish academically. This also implies they will receive a better quality of life in the long run, causing the gender pay gap and wealth gap by race to further decrease over time as more groups diverging from white, heteronormative males will gain more opportunity to build their academic and occupational success. Then what is stopping this monumental movement towards educational equity?

Despite school administrators frantically scrambling to stress their commitment to anti-racist ideologies to the public, many white administrators fail to address how they and their children benefit from school policies such as SRO implementation. Whether acknowledged or not, white people have a possessive investment in the benefits of their whiteness and see equalizing the playing field as losing something. Although there is a recognition of the hurdles minority students must overcome in comparison to their white peers, there is a privileged proclivity of ignoring the action it takes to impede it. With this in mind, it is essential that people who care about the future of our youth apply pressure to local school board members to call for a commitment to anti-racism by expelling the use of SROs on their campuses. Lack of immediate action directly perpetuates feelings of unsafety among marginalized groups of children on a daily basis, obstructing them from absorbing the full potential the education system has to offer. Systemically, board members continuing to place SROs on K-12 campuses contributes to the supplementary life opportunities that whites have access to simply due to skin color. Although some board members may advocate for SRO implementation with good intentions, ignorance is no excuse when there is ample evidence of its destructive repercussions.

Rejection of upholding white supremacy in education begins with instituting alternative school safety solutions. Non-intimidating substitutions to SROs will allow students who feel threatened by police presence to have higher school attendance and higher opportunity for academic achievement. Such alternatives include the expansion of mental health advocates and social workers among school campuses to assess psychological health and stabilize emotionally fraught students, as well as the institution of threat assessments to directly prevent violent outbursts and mass shootings. LA county alone annually spends an appalling $770,000 on the incarceration of a single teenager (Loudenback 2020). Rather than spending more tax dollars on incarcerating Californian youth, funding can be outsourced towards thwarting school-based violence without rejecting and threatening students. Black, brown, and other groups of children should not be forced to coexist with a frightening authority figure at an institution they are demanded to attend during the most formative years of their lives and can have a pre-eminent impact on their life trajectory.

An abundance of concrete research sheds light on the undeniable consequences of SRO presence on minority students, female students, and students who experience violence, demanding the undivided attention and action of educators and administrators. To remedy this, it is clear that school board members must terminate their coalition with police and sheriff departments. Spearheading a statewide abolishment of SROs will set California as the precedent for cultivating a nondiscriminatory academic environment and shifting school culture positively for minority groups. Pressuring school board members will shine a spotlight on the preservation of white supremacy through youth policing on school property, forcing administrators to show how truly dedicated they are to eradicating racism in their school districts. Children often see their schools as safe havens; they are entitled to feel safe, protected, and cared for on their campuses without experiencing discriminatory targeting by an armed officer. Expelling law enforcement from campuses will contribute to an alleviation of some of the state’s most tense and troubling issues of inequality, such as the gender pay gap and the disparity of wealth by race. Hence, we must demand school board members to remove SROs from school campuses in order to shift the future of California to a more equitable and inclusive environment.