Opinion: Medicare for All Is Inevitable 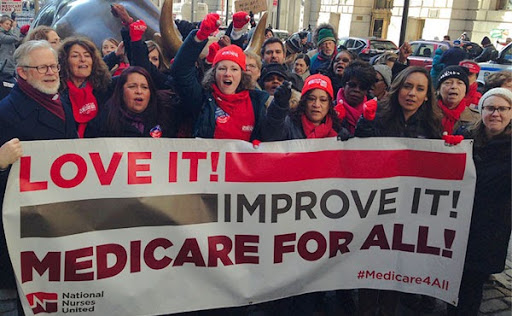 One of the most polarizing debates regarding the future of healthcare in the U.S is  whether or not to replace the current system of privatized healthcare with a universal, federally-funded system  called Medicare for All.  This idea of implementing such a system gained traction due to both the charismatic persona of advocate Senator Bernie Sanders and a growing majority of Americans being dissatisfied with the healthcare system. Implementing the idea is not so much a question of “how” but when because such a system, which covers all medical care excluding plastic surgery, is the only way to protect the health of all citizens in the US. It’s the most affordable solution for the average American, and, contrary to popular belief, will allow for quality health care for all.

Medicare for all is the only viable solution to address the health care crisis in the US. According to recent CDC data, in just 2018, 30.4 million Americans were still uninsured (mostly due to the steep costs of health insurance), even with the Affordable Care Act in place which expanded health insurance coverage and allowed the government to regulate the health insurance market [7],[15]. Insured people themselves are held back by this system: it forces people to delay desperately needed treatment because of exorbitant out-of-pocket costs and co-pays [6]. Plus, this system allows the private health care industry to punish Americans rather than prioritize them as patients if they receive care outside of their insurance network [12]. Moreover, around 26% of bankruptcies in 2013 were rooted in medical expenses which seems almost ironic–people lose their livelihood because of measures they take to protect it [2]. Under Medicare For All, all Americans’ health would be the priority by eliminating the complex financial burdens of deductibles, co-pays, out-of-pocket fees, and time costs like filling out paperwork or wasting time tracking what facilities are in someone’s insurance network [12]. Without these stresses, people could seek regular and consistent care, reducing the need for as many emergency hospital trips, thus reducing health care costs, especially for the most vulnerable low-income groups who are most likely to delay treatment [6],[15]. Clearly, although the Affordable Care Act made steps in the right direction, these small steps are not enough to directly impact the quality of life of all Americans in the long run. While Medicare for All requires a massive uphauling of traditional institutions of health care and a considerable amount of time to implement, it would lead to much more of the population leading healthier lives. Medicare for All’s effects would also only reach and bring health to more people over time, in a way that the Affordable Care Act could never.

While some believe Medicare for All puts undue tax stress on the individual, Medicare For All will actually be proportionally more affordable for the vast majority of Americans versus the current system. If the current healthcare system persists, each American will pay around $14,944 annually by 2023 on health care, whereas if the U.S adopts Medicare for all, each American spends only $9,928.50/year on health care [13]. Many also point to an increase in income taxes to show that universal health care will burden Americans more than the current system, but in reality increases in income taxes come from the fact that Medicare for All will be completely financed by the federal government which will also reduce costs in terms of people no longer paying any out-of-pocket fees, private insurance premiums, co-pays, deductibles, and state taxes for healthcare [12]. Medicare For All also reduces the burden for companies and states as the former would not have to bear the costs of their employees’ insurance premiums, and the latter could reduce Medicaid and state employee benefit expenses from their budget [12].

Those opposed to Medicare for All often believe that it degrades the quality of medical care; however, Medicare For All maintains and potentially improves the quality of health care for everyone. Some point to the severely long wait times for certain treatments in countries like the UK and Spain as evidence of inferior medical quality in universal health care systems [4]. Contrastingly, according to U.S Insurance Agents, there is virtually no discernable difference in the quality of medical care nor a difference in wait times in many European countries’ universal health care systems when compared to private health care in the U.S [10]. Some also assert that Germany’s two-pronged system– where both public and private health care systems are available– illustrates why private health care systems are superior because Germany’s universal health care option is inferior in quality to its private option [4],[9]. However, the flaw in this argument is in the implicit assertion that the US's private health care system is comparable to Germany’s private system when it’s clearly not. Only around 13% of Germany’s population is on their private system, and for the most part, the vast majority of Germans on this plan are very wealthy, whereas most of those who possess healthcare in the U.S are on private plans [9]. Thus, when catering to a small chunk of their population who can afford expensive treatment, members of Germany’s private healthcare will obviously experience superior quality health care compared to those on their public option. In comparison, while supporters of the current system in the U.S speak about the superior quality of healthcare, around 1 in 4 people either have intentionally not received medical treatment due to the fees or know a family member who has done so, illustrating that while high-quality health care exists in the US, few truly can afford to access it [6].

The most important reason why Medicare for All is desperately needed can be seen by those who have the least access to the current system and those who benefit the least from the supposed world-class care and quality of life in the US. To address the first point, the uninsured are disproportionately White men, young and old adults alike, who are usually low-income, and clustered in the South— one of the poorest regions of the U.S [5]. Furthermore, in 2016 these Southern regions were reported to have the worst quality health care system across all regions of the U.S and as illustrated through a U.S News report, many Southern states also made up the lowest rankings in terms of accessibility to premium care [1],[14] . Such statistics undermine the legitimacy of the idea that the U.S boasts world-class quality healthcare by showcasing how a great deal of the population can not access such care. In a similar sense, for the second point, those who are most vulnerable to high rates of disease and simultaneously face discrimination for healthcare accessibiity and in treatment,  overwhelmingly tend to be marginalized minorities. Black, Latinx, and native American people, overall, have much higher rates of diseases that are potentially life-threatening like obesity, diabetes, and asthma as compared to White citizens [3]. Moreover, LGBTQ+ people experience high rates of mental health issues and a much higher risk of violence than their non-queer counterparts [3]. Clearly, minorities are much more likely to need medical care; however, not only are many people uninsured within some of these populations but they also often face the most barriers to accessing medical care [3],[11]. Moreover, in combination with the first point that most of the uninsured ironically come from the most traditionally privileged social group in the US, (white men), it is clear that the issue of not being able to access healthcare cuts across identity in America. Furthermore, those who are uninsured aren’t rich, well-off people that could pay out-of-pocket costs several times over; but, rather, those who can least afford to be uninsured or denied access to health care. To foster a society that truly protects all its citizens and fosters the idea of the American Dream, we need a system of national healthcare that promotes care for all at every level. We need Medicare For All.

Since America’s conception, it was argued that every person had certain unalienable rights– to life, liberty, and the pursuit of happiness. Our founding fathers laid out these conditions to form as the basis of our government, the basis of the American people’s protection. However, today, these rights are at stake. The current system of privatized healthcare not only fails to adequately provide quality care to all but it leaves people out of the system, denying them their most fundamental unalienable right–that to life.  Medicare For All is the only way to protect Americans’ health. While detractors argue against the model on accounts that it entails exorbitant spending increases and would lead to a degradation in medical care, they fail to understand that this system would not only universally aid the whole nation but yield returns in other sectors such as the economy and empowers historically marginalized populations access to quality healthcare. This system will not only remind people of the “care” in healthcare, but it will also enable Americans to feel equal and united as a nation, thus serving as the basis for true democracy. In this sense, Medicare for all isn’t just the future of health care; it’s the future of our nation.