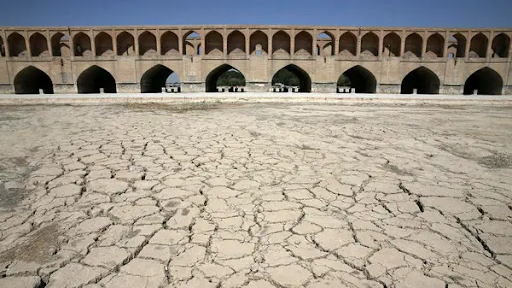 After decades of negative precipitation trends, Iran is on the brink of an environmental and socioeconomic crisis [1]. Over the summer of 2021, thousands of Iranians from the southwest province of Khuzestan took to the streets to protest the mismanagement of the government in combating water scarcity. Five million Iranians in Khuzestan were left without water for multiple days in the blazing Iranian summer months. The protests resulted in the deaths of over 300 protestors [2].

As authorities blame the crisis on severe drought and falling precipitation rates, demonstrators point to negligence and unsustainable solutions to the water bankruptcy crisis. Iranians are once again furious at their government for not taking drastic measures to implement sustainable irrigation projects. Soon after in November, Iran was wound up in a second round of protests in one of its largest cities—Isfahan. This central Iranian city was once home to the large flowing Zayandeh River that cuts through the city–that river is now completely barren. Iranians across the world took to twitter to express their outrage and sympathize with those in Isfahan by using  #اصفهان (Isfahan) and #اصفهان_تنها_نیست (Isfahan isn’t alone). Journalists have coined these protests as the Uprising of the Thirsty [3].

Iran currently stands as the sixth-highest greenhouse emitter [8]. While Iranian politicians agree with the existence of climate change, they have been paralyzed by sanctions and thus have failed to implement plans to combat its effects. Majid Takht-Ravanchi, Iran’s envoy in the UN stated in the UN Security Council that the harsh sanctions against the country have hampered its ability to tackle the effects of climate change [13].

The Islamic Republic has constructed numerous dams within the last four decades, but Iranians denote the lack of government planning and illogical water diversion as the main basis for water shortages. Iranian officials had predicted this outcome but failed to implement plans. The former Iranian Agricultural Minister, Isa Kalantari, warned the government in 2015 that water bankruptcy will soon force many Iranians to mass migrate[4]. Iran’s state-run television has also admitted to the dire environmental state, which is currently causing the homes of 28 million Iranians to suffer through harsh water shortages, especially in the southern and western provinces of the country [3].

As Iran’s rainfall plummets and less water is deposited from the mountains in the north, farmers are witnessing a shrinking share of the dwindling water supply [3]. A major component behind Khuzestan’s crisis is the result of various projects implemented to divert water in Karun and Dez Springs to Isfahan and Yazd province in the 1980s. These two water sources once accounted for over a third of Iran’s water supply but have now left Khuzestan as the most water-desolate province in the country [4]. This water diversion was done to direct water from the wetlands in the west to support the arid agricultural and urban areas in central Iran. Central Iranian provinces of Yazd and Kerman are known for producing pistachios–Iran’s greatest export and a high water incentive crop. Thus, they pose an agricultural and economic asset for the Iranian economy [9]. With limited water and resources, the Iranian government views higher incentives by diverting the water in Khuzestan to Central Iran. The existence of many major cities in the central regions of the country also play a factor in the water diversion.

Seyed Ahmad Avaei, a parliament member from Dezful, admitted that the faults of water transfer projects in Khuzestan “began from the government of the late Hashemi. This, of course, was a grave mistake from the beginning, and subsequent governments are continuing to do so” [4]. He also referred to the historical plans to divert water from the oil-rich province of Khuzestan to central Iran as anti-environmental and especially harmful to Khuzestan [4].

Water shortages have worsened as a result of hydroelectric dams. This is largely due to the accumulation of water in reservoirs that evaporate in severe heat. Some of these reservoirs have been released for people’s use to ease the water scarcity in the past but the issue of water shortages still exists [11]. Additionally, Iran’s water crisis issue is coupled with frequent electricity outages. The water shortages have intensified the power crisis because Iran partially depends on hydroelectric dams for energy. In the summer of 2021, as Iran was in the midst of a pandemic and a growing water crisis issue, President Rouhani attempted to reassure the public that the electricity cuts are temporary and blamed the problems on high temperatures and extreme drought [12]. The Iranian government asked the public to limit electricity use and diverted the blame to increasing consumer demand for electricity, and more so on computers used for bitcoin mining. The government shut down over 200,000 machines used for crypto-mining and cut off electricity exports to Iraq to help lower the frequency of electricity shut downs [12].

There have been numerous political protests that have led to the recent environmental protests in Iran. In November of 2019, protests erupted overnight after the Iranian government hiked gasoline prices nearly 300% [10]. This policy was implemented in order to institute a new rationing system to help the poor but it immediately backfired. The protests soon took over 100 Iranian cities, first stemming from protests in Khuzestan. As the economic outcry of demonstrators shifted to anti-government and revolutionary protests, the Iranian government turned violent in response. The Internet was blocked in Iran for over five days and the protests resulted in the deaths of over 200 people and the arrests of 4,000 [10].

As Iran struggles to combat high inflation and strikingly low unemployment rates, its stability is further threatened by the ever-growing water crisis issue. Many fear that if the water issue is not addressed, it could cause detrimental socio political effects in the country. Although the water protests started as a means to highlight the dwindling water access, they quickly transform into a broader economic outcry. This is evident through the spread of protests from the focal city facing an imminent water shortage to other regions of the country. The spread of protests is not only a means for Iranians to show support for those in another region, but an outlet to demonstrate economic and political grievances due to a build-up of momentum from water protests. During a protest in Tehran following the Khuzestan water protests, a demonstrator admitted that “besides supporting [the people of] Khuzestan, we are protesting unemployment, high prices, poverty, and the existing problems in the country” [2]. Following the politicization of the Khuzestan water protests in July of 2021, the government resorted to a near-total block of internet access. The cut of the internet, analysts theorize, is Tehran’s way of suppressing the protests and limiting any communication between protesters to mobilize. A common slogan that often arises at these protests alludes to the Iranian people’s animosity against the government for prioritizing aid packages and military spending to neighboring countries such as Iraq, Syria, Palestine, and Yemen, but failing to ensure basic economic necessities for its own citizens.

But Aren’t Droughts Common in the Region?

A dry and arid climate is prevalent in the Middle East, but what differentiates Iran is its stubborn dependence on self-sufficient agriculture, and economic inability to install water desalination projects. As environmental scientists point to trends indicating hotter and drier years to come for Iran, the Islamic Republic is fixated on furthering its resistance economy and self-sufficiency.

Self-sufficiency is deeply rooted in the Iranian constitution and the country’s historical ideals to be self-reliant [4]. A self-sufficiency agenda necessitates a domestic agricultural system. Iran’s agriculture consumes over 90% of the nation’s water supply, leaving very little water for the 85 million and fast-growing population [5]. The government has used huge environmentally insufficient dams to encourage further cultivation of crops, fueling their agriculturally self-sufficient ideals. These government-funded dams have caused blockages in rivers, forcing farmers to overuse water pumps and further increasing the water bankruptcy in the country. Half of the wells dug by the nation’s agricultural sector are illegal and highly unsustainable, according to the nation’s agriculture minister [6]. This has created an ill-cycle of harmful and short-term infrastructure that only deteriorates Iran’s water supply in the long run. Scientists warn that in the next 50 years, aquifers in 12 out of the 31 provinces of Iran will completely dry out [4].

Iran is also facing a large demographic challenge: 85 million people and a growing consumption habit of water. As more and more Iranians shift from a rural to urban lifestyle, it is expected that their water consumption will directly increase [7]. Since the start of the Islamic Republic in the late 70s, the population of Iran has nearly tripled. Unarguably, these demographic changes create further problems for Iran’s water supply.

So, why are other nations in the region, like Saudi Arabia and Oman not facing a similar situation as a result of the drought? Iran’s government structure and economic state make it more difficult for any large-scale environmental solutions to be implemented. The neighboring Arab rentier states are able to finance expensive projects like desalinization due to their thriving economy. The Arab gulf nations particularly also have a lower demand for water due to their limited agricultural sector and smaller population. Iran is the most populated Middle Eastern country, and thus faces consumer demand issues with water that its neighbors in the Gulf do not. Despite possessing a less arid climate and an abundance of snow, Iran lacks other economic means to combat water scarcity. Iran is currently facing inflation, a stagnated economy, and mass unemployment, most of which are a direct result of U.S. sanctions. These factors make it unlikely to prioritize spending on desalination plants.

It is important to note that those that have been present in water protests have historically come from demographics that have been supportive of the regime. The poor farmers from rural areas in Khuzestan and in towns surrounding Isfahan, for example, rely heavily on subsidies and government programs. The very idea that they would voice concerns against the government signifies the gravity of the water crisis in Iran.

Thus, the topics of water bankruptcy and politics are directly linked. The government is left to decide which fate is more important: fixate on self-sufficient agriculture with a closed economy due to its nuclear program, or abandon its nuclear program, allowing its economy to thrive and potentially have the economic means to install long term water irrigation projects and desalination plants like its neighbors. Because the likelihood of the first scenario is much higher, it is predicted that in the next decade, Iran will disintegrate in a state of political and economic disarray due to its failure to address water scarcity.