Indigenous Activism is at the Forefront of Modern Environmental Advocacy 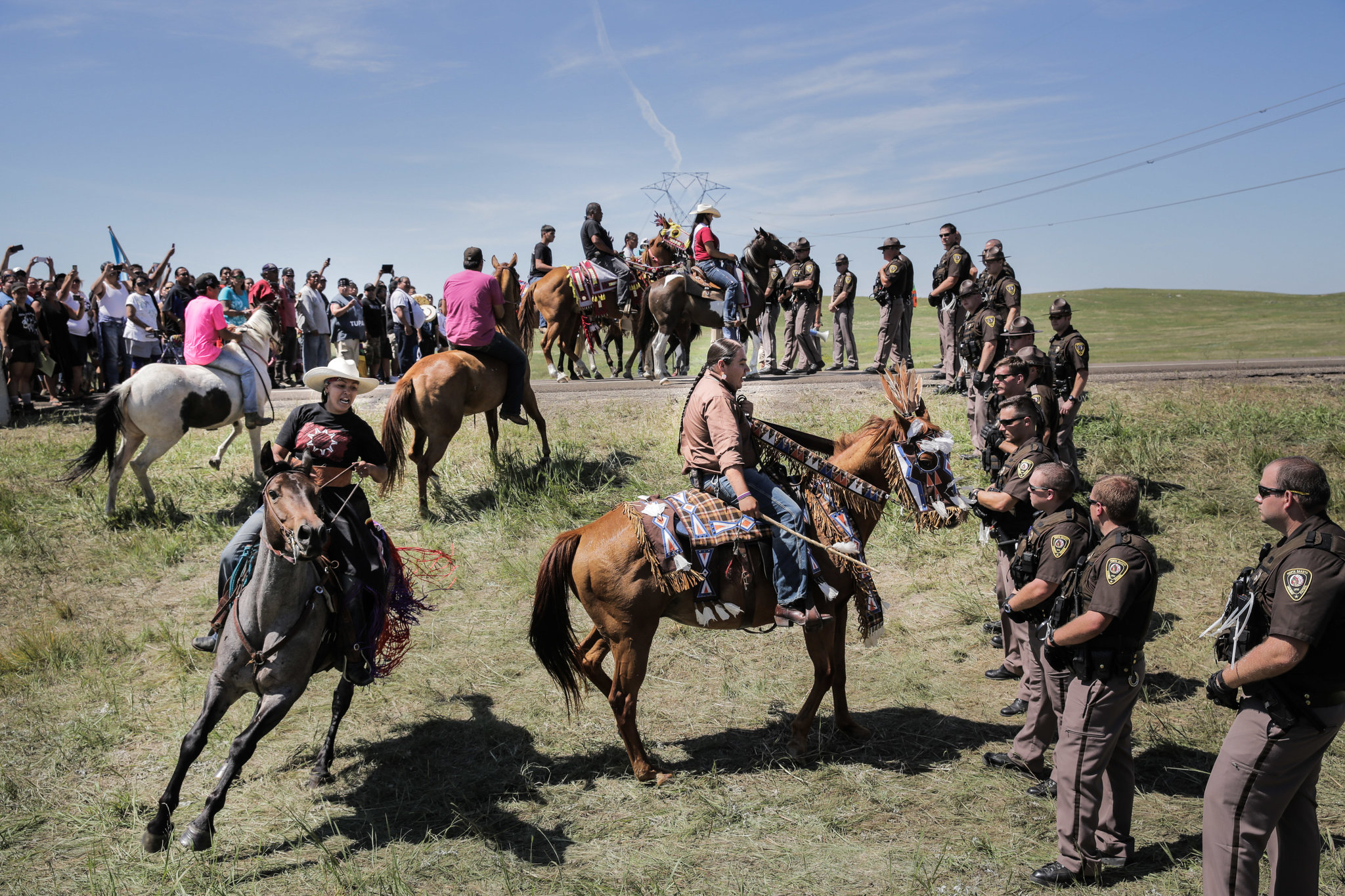 In much of the modern discourse surrounding climate change, particularly in discussions about the reduction of carbon emissions or the use of fossil fuels, there exists a fundamental belief in the power of large-scale, regulatory legislation. Such legislation often seeks to transform the economy, incentivize other forms of clean energy use, and disincentivize companies’ use of fossil fuels. Bills like the Green New Deal [1] or policies like the CEPP [2], which calls on the federal government to wean the United States from fossil fuels and curb greenhouse gas emissions across the economy, are often at the center stage of the climate fight. Yet, in this strong conception of what it means to fight climate change, carbon emissions, and fossil fuels, there also exists a fundamental disconnect with how to actually reduce carbon emissions. Within this disconnect lies Indigenous peoples’ activism against pollution and emissions all across the world, including in the United States.

Indigenous activists have opposed climate deals like COP26, which advocated the creation of a global carbon trading market where countries can meet portions of their climate targets by buying credits representing emission cuts by others. This proposal is opposed by Indigenous groups across the world because processes such as reforestation, hydroelectric dams, and monocrops that come with these deals negatively impact Indigenous communities that harbor the very biodiversity so many want to protect [3]. International agreements such as COP26 fail to agree on mechanisms and funding to support communities and countries facing the devastating impacts of climate change [4] and natural disasters. Such countries harbor Indigenous communities who face the brunt of so much of climate change and its impacts. Even the Green New Deal, which mentions consulting and prioritizing Indigenous voices, fails to mention fracking and nuclear energy [5]. Indiginous communities’ agriculture, cultural sites, and drinking water are all at stake in the fight against climate change, but these deals fail to consider their voices [6].

Looking to Indigenous peoples’ advocacy on the ground today, we can see the power of their activism in the fight against emissions and pollution. The Line 3 Pipeline Expansion, a project opposed by Indigenous leaders [7], will transport 1 million barrels of tar sands per day across northern Minnesota from the Canadian province of Alberta to Superior, Wisconsin. Climate change legislation does not provide an immediate solution for the climate impact of this pipeline, which will have the emissions equivalent of building 50 coal power plants [8]. Indigenous activists, although unsuccessful in stopping the pipeline in recent court ruling [9] in August 2021, exposed a clear gap in the politics of those who claim to support clean energy measures or climate change legislation. They argue that the pipeline violated their treaty rights [10] and various lawsuits were launched, and called on President Biden to halt production of the line as he did with the Keystone XL pipeline [11]. Minnesota politicians like Amy Klobuchar and Tim Waltz, who campaigned against pipelines on treaty land [12], were confronted at political events on the topic as well.  Even now, the White House has been pressed on their support or opposition of Line 3 during press conferences. Indigenous people have brought projects like this pipeline to the center stage of the national conversation surrounding climate change [13]. They have managed to expose a critical blindspot in many politicians’ viewpoints surrounding climate change. These are the voices highlighting where and what to look towards when considering how to fight climate change.

Although activists failed to stop Enbridge (the company overseeing the Line 3 expansion project) in court [14], Indigenous peoples and their legal representation used tribal courts and rights-to-nature laws to find new avenues to stop these pipelines. Many of the waterways that the Line 3 expansion is set to go through is ceded land from Indigenous territories. Treaty rights such as those concerning the White Earth band of Anishinaabe — the largest of the six federally recognized Indigenous reservations that make up the Minnesota Chippewa Tribe — allow Native peoples to fish, hunt, and gather white rice on these ceded territories. Rights of nature laws, which have been a global phenomenon, have been codified by Indigenous groups, including those in Minnesota. These laws describe inherent rights as associated with ecosystems and species, in particular the Manoomin type of rice, found in the same area where the Line 3 project is taking place. Since dewatering, the process of removing water from soil for pipeline construction [15], is necessary for the Line 3 expansion, activists are arguing that this violates right-to-nature laws codified by Indigenous peoples and subsequently supported by treaties in the past. The dewatering process would affect the growth of Manoomin rice, thus giving legal grounds for a lawsuit. This lawsuit would have to be allowed to go through tribal court first by the 8th Circuit Court of Appeal. It also targets state regulatory agencies, which have green-lit the dewatering and construction processes of Line 3 in the first place. Interestingly, this lawsuit does not target pipeline companies like Enbridge which are overseeing the Line 3 expansion.

Right-to-nature laws have been passed throughout the world, such as in Ecuador in 2008 and in Bolivia in 2011. They are the future for Indigenous communities’ ability to stop pipelines and other disastrous projects that further exacerbate climate change. While they are a relatively new concept, the scope of the decision emanating from this lawsuit could further into other projects affecting Indigenous peoples’ land and stewardship, furthering the fight against other carbon emissive projects [16].

In the past, Indigenous activists in Hawaii have managed to secure legal wins protecting their land against pollution from the US Navy. The US military has been, and remains, one of the largest climate polluters in history [17], consuming more liquid fuels and emitting more CO2e (carbon-dioxide equivalents) than many countries. In the 1990s, activists in Hawaii’s Kahoolawe managed to halt all U.S. Naval activities on the island after the discovery of an unexploded 500 lb. bomb in West Maui left over from test bombings in 1965 [18], Looking to today, Hawaii provides an insight as to why Indigenous activists are still fighting. Just recently, the US Navy was found to have polluted groundwater [19] that provides the drinking water for over 400,000 residents and visitors from Hālawa to Hawaiʻi Kai. Since late November, the Navy, which initially dismissed these concerns, has known about a petroleum-like odor emanating from many residents’ water supply. Again, Indigenous peoples’ environmental activism exposes critical gaps [20] in popular conceptions of what it means to fight pollution.

Beyond local climate change advocacy, Indigenous peoples across the world have worked to protect around 80% of global biodiversity [21]. One study found that Indigenous peoples in the United States and Canada have managed to stop greenhouse gas pollution equivalent to around 25% of the two countries total emissions [22]. They have maintained low rates of deforestation, with around 36% of remaining intact forests existing on Indigenous land [23]. These forests act as a way to sequester carbon, a key ecosystem service in the fight against excessive carbon emissions. Indigenous people are estimated to manage at least 22% of forest carbon and 17% of total carbon stored in forests [24]. Why are these voices not in deals like COP 26? Why do they read as an afterthought in the Green New Deal? These are the communities on the ground that have managed to effectively and ethically address environmental threats, and their fight casts a spotlight on the future of climate advocacy.