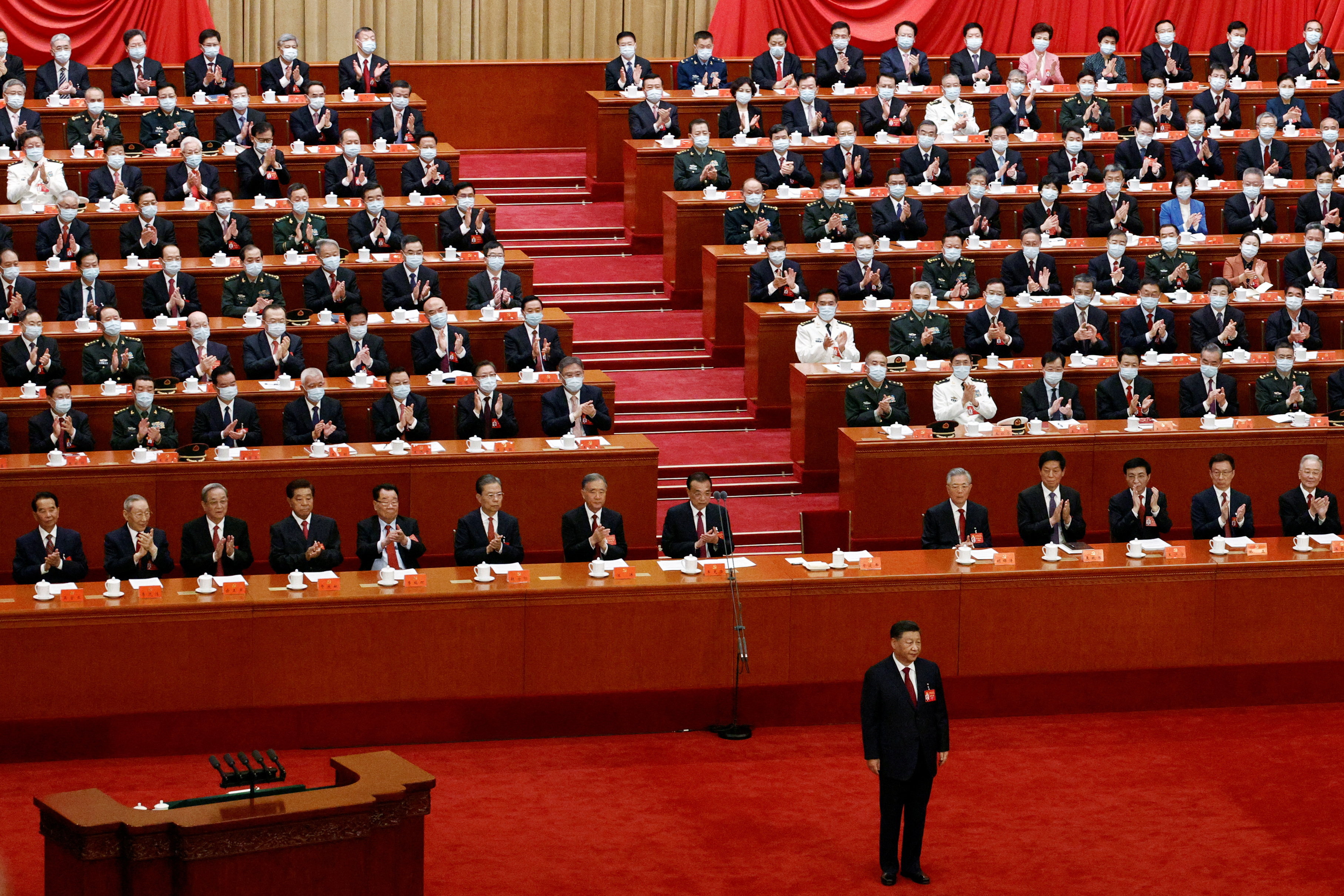 On October 16, Chinese Communist Party (CCP) officials from across China converged in Beijing for a historic meeting. Every five years, the CCP holds a week-long conference to set its leadership and outline its policy agenda. It is usually a routine affair meant to project the CCP’s power, but at the 20th National Congress, premier leader Xi Jinping broke traditions, forcefully removing his predecessor from the meeting and extending his reign indefinitely. Xi’s most alarming move, however, was a proclamation to the congress and to the world that China’s political system offers developing countries a “new choice” in governance that rivals liberal democracy. Xi’s model of governance threatens human rights around the world because it is built on the pillars of authoritarianism, surveillance, censorship, and ethnic persecution. The U.S. must counter Xi’s vision by investing in relationships with developing countries because a world more aligned with Xi’s domestic model is a world more hostile to human rights and more hostile to Americans.

While opposing the CCP’s domestic policies, the U.S. must avoid broader conflict with China. During the Cold War, the U.S. and U.S.S.R. fought proxy wars and amassed weapon stockpiles, endangering Americans and jeopardizing human rights. Engaging in similar confrontations with China would reflect a failure by the U.S. to learn from its past. The U.S. should, however, maintain its military strength and monitor China’s military activity for national security reasons. In addition to avoiding military conflict, the U.S. should also avoid large-scale economic strife with China. The Cold War era obsession with economic supremacy for its own sake could lead to a trade war that would harm the American economy. [1] Instead, U.S. policymakers should increase the competitiveness of American industry by decreasing the foreign dependency of U.S. supply chains and defending intellectual property. American policy must promote human rights to counter Xi’s anti-human rights agenda. When policymakers fail to prioritize human rights, the American people should hold them accountable in the town square and at the ballot box, abilities that Xi denies his people.  The U.S. should promote a human rights-focused domestic model to developing countries while maintaining friendly economic and military relations with China.

The Four Pillars of the ‘New Choice’

The function of American foreign policy is to protect American lives and promote human rights. Xi’s government, valuing stability over freedom, is built on four pillars that harm human rights, and Xi is encouraging developing countries to adopt his domestic model. Countries that adopt Xi’s form of governance are more likely to oppress their citizens and endanger Americans.

The form of governance that Xi champions relies on a powerful, authoritarian leader. In Xi’s ten years in power, he has consolidated power and silenced dissenters, becoming the lone and unchecked voice of China. He already held the dual titles of general secretary of the CCP and head of the Central Military Commission, and at the 20th National Congress, he became secretary general for a third term, the first man since Mao Zedong to lead the People’s Republic of China for more than ten years. [2] He filled the standing committee of the Politburo, the most powerful body in China, with six loyalists from the same ideological faction of the party, and the man considered Xi’s successor was excluded from the larger, 24-member Politburo. [3] In a display of power in plain view of international media, Xi had his predecessor, Hu Jintao, forcefully removed from the seat directly next to him following a vote on the party’s leadership. The government later claimed the removal was for health reasons, but the move was likely a sign to party officials that no member was immune to Xi’s purges. [4] The lives of the Chinese people will be shaped by Xi’s will, without challenge, for as long as Xi pleases. A country dominated by a single person is hostile to freedom and dangerous to the world.

Mass Surveillance of the Public

Xi’s ‘new choice’ depends on a massive surveillance apparatus powered by advanced technology to monitor citizens’ actions. To identify potential threats and monitor China’s 1.4 billion citizens, the CCP uses street cameras and facial recognition technology and tracks communication on personal devices. Over 200 million facial recognition cameras, half of the world’s supply of such cameras, are scattered across the country, constantly surveilling the Chinese people. [5] The technology allows police to track citizens’ movements in real-time and allows the government to collect information on every citizen’s activities and social connections, enabling increased government control. These efforts have only intensified in recent years. The government is currently constructing a vast DNA database of its citizens and is collecting iris scans and voice prints. The exact goal of this mass biometric collection is unclear, but it is certainly not only to aid police investigations. [6] Xi views surveillance technology as both a necessity to maintain control and an asset in international trade. The innovative technology is already sought by many governments, particularly in the southern hemisphere. The CCP markets the technology as policing equipment, but it can also be used to control the population by tracking and restricting activities. China’s surveillance network infringes on the freedoms of the Chinese by tracking them without their approval and enabling the government to control their actions. Any country that imports such technology will have the same ability to track and control.

Another cornerstone of Xi’s domestic model is the suppression of all speech deemed threatening by the government. A government initiative nicknamed ‘The Great Firewall of China’ blocks access to nearly all foreign internet platforms and media, keeping the vast majority of Chinese citizens in the dark about events around the world and within their own country. [7] The government’s policies rob its citizens of knowledge and the ability to express themselves. All news media and online activity is monitored to ensure it promotes CCP values. The threat of litigation and arrest forces citizens and media outlets to self-censor, with many companies hiring their own monitors to preempt government censorship. Among the 65 countries with the most internet usage, China ranks last in press freedom by Freedom House. [8] The government has about a dozen agencies that enforce censorship laws, and companies across China employ millions of people to censor content deemed illegal by the CCP. Even images of Winnie the Pooh were blocked because of memes that likened his appearance to Xi’s. The government is particularly concerned with content revealing government malfeasance, fearing that an informed citizenry would hold it accountable. In Xi’s domestic model, the preservation of the party’s power is more precious than freedom. [9] If countries follow Xi’s lead, more people will be subject to governments that value their own power over their citizens’ education and expression.

Xi’s government persecutes ethnic minorities because his form of governance depends on cultural homogeneity to decrease the risk of political opposition. Many countries, including the U.S., accuse China of genocide against Uyghurs, an ethnic minority in the Xinjing province that practices Islam and speaks a Turkish language. The government is accused of sterilizing Uyghur women, separating children from their families, destroying mosques, and jailing cultural and religious figures. CCP programs supporting ‘national unity’ have led to an influx of Han Chinese, the ethnic group comprising about 92% of the Chinese population, to Xinjiang in recent years. Similar programs have led to forced marriages between Tibetans and Han Chinese and Uyghurs and Han Chinese. Uyghurs are constantly threatened with imprisonment in one of China’s 380 re-education camps, which hold about one million Uyghur detainees. The camps are accused of physically and sexually abusing inmates, forcing inmates to pick cotton and work in factories within the camps, indoctrinating inmates with pro-CCP propaganda, and forcing inmates to renounce their Uyghur culture. Throughout his reign, Xi has increased the construction of Uyghur re-education camps. [10] He has departed from a policy of “regional autonomy for ethnic minorities,” banning the use of minority languages in schools and cracking down on the practice of Islam, Christianity, and Tibetan Buddhism. [11] In Xi’s China, all threats to government rule are expunged, threatening the existence of minority cultures in every country that opts for his ‘new choice.’

Recent protests throughout China reveal the strain that Xi’s domestic agenda has put on the Chinese people. Despite surveillance, censorship, and the constant threat of retribution for challenging the all-powerful party, protesters are voicing their grievances with Xi’s “zero Covid” policy, which has led to nearly three years of mandatory testing and forced quarantines. The protests stand in stark comparison to the citizens’ outpouring of love and support for Xi and the CCP that the government broadcasted throughout China during the 20th National Congress. The protests offer the world a rare glimpse at the Chinese people’s genuine thoughts, and the Chinese people are rebuking Xi’s policies and demanding more freedom. The protests echo changing sentiment in Hong Kong and Taiwan, according to a recent study. [12] A majority of people in these regions, unlike in 2019, have a negative view of China’s future because of restrictions on Hong Kong’s political autonomy and tensions in the Taiwan Strait. Xi’s imposing domestic agenda is causing increased discontent within China and increased calls for more freedom.

Investing in a Safer Future

Every day in China, one person dictates the law, millions are secretly tracked, no one can express themselves freely, and minority cultures are pushed to extinction. Developing countries have yet to adopt the four pillars of Xi’s domestic agenda. However, Xi could leverage economic relationships forged by the Belt and Road Initiative, a conglomeration of international infrastructure investments that bolster Chinese trade routes, to promote his vision. The U.S. should not pursue a similar development project because it strays from the goals of protecting Americans and promoting human rights. And, following the 20-year war in Afghanistan, American voters do not seem keen on massive foreign investments, with the exception of aiding Ukraine’s existential battle against Russia. Instead, the U.S. should strengthen diplomatic ties with developing countries and lead the world in human rights advocacy.

The U.S. has expressed interest in such efforts but must prioritize them more in the future. In December, the U.S. hosted the U.S.-Africa Leaders Summit to facilitate partnerships with African business and government leaders, and the U.S. successfully lobbied the United Nations Economic and Social Council to remove Iran from the Commission on the Status of Women for violently suppressing the rights of women. [13] With Xi poised to promote his domestic agenda abroad and authoritarianism on the rise globally, the U.S. must invest in relationships with governments around the world to encourage a domestic model centered on human rights. [14] The most pressing threat from Beijing is Xi promoting a ‘new choice’ to developing countries. The U.S. must counter Xi’s form of governance not for the sake of economic supremacy or military posturing but for the sake of human rights, ensuring a freer and safer world for all.