Canary in the Coal Mine: Twitter's Warnings and Possibilities for the Future of Diplomacy 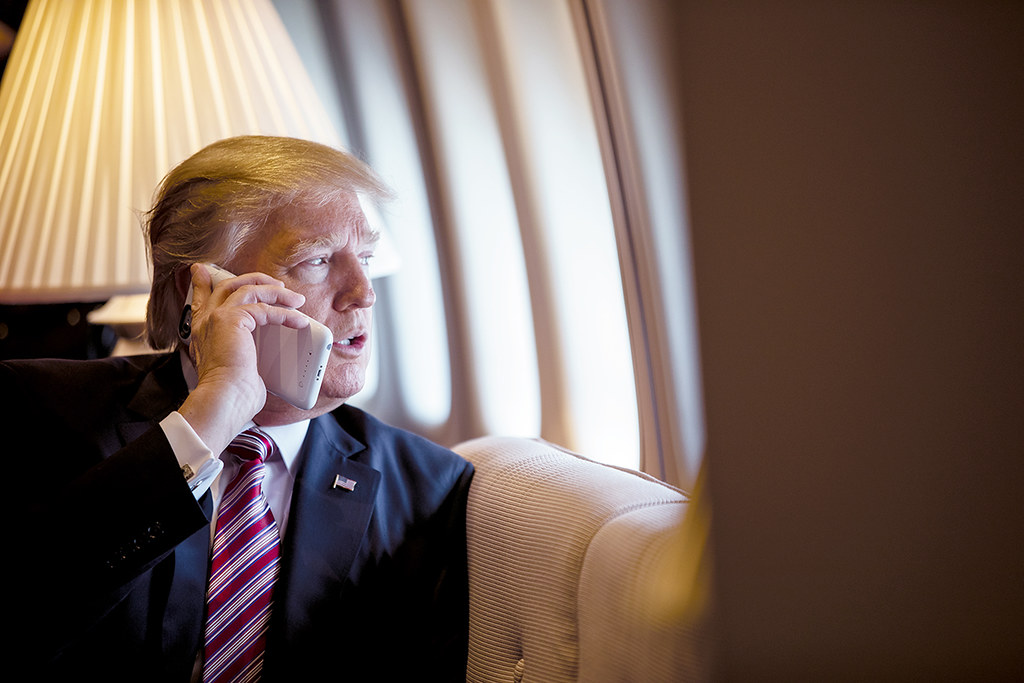 Fans of Stanley Kubrick’s humorous 1964 film Dr. Strangelove will recall a scene of the U.S. presidential administration gathered dramatically in a war room, frantically trying to reach a drunken Soviet Premier through landline explaining that total nuclear annihilation is only a few hours away, as a result of a rogue armed bomber. Four decades later, in Aaron Sorkin’s The West Wing, a nuclear disarmament deal is only reached through secret code, as the Russian president mistrusts his own diplomats in the White House. In both dramas, the fate of the world and its destruction lie in the hands of a few flawed humans and their antiquated technologies - not a far cry from the reality of international politics.

International relations such as these rely on communication – state representatives and diplomatic corps create perceptions of their countries, negotiate over trade and conflict cessation, and individual dignitaries engage in interpersonal interactions at the behest of their constituents. International relations solely exist on such basic communicative mechanisms, even when interests seem diametrically opposed. Yet today’s landscape between countries like the U.S. and Russia seems fundamentally different from that of Kubrick and Sorkin – the world of smartphones and conference calls is conspicuously devoid of the bright red nuclear hotline in the Oval Office. One key force defining contemporary international affairs is social media, altering the manner and balance of power in interstate relations. The role of social media platforms like Twitter is unclear; they seem to both disrupt and enhance diplomacy in differing contexts. Affordances of social media are especially disruptive in the realm of diplomatic codes and conflict avoidance while providing novel avenues for achieving public diplomacy goals.

At the language level of communication, social media may shift the diplomatic code – the crafted language of diplomats and international relations used to avoid offense and crises. Diplomatic language must be constructive and ambiguous in order to protect state interests, secrets, and to hedge positions in high-stakes negotiation[1]. Such tactics are essential when an offended party could swiftly retaliate with trade sanctions or missile strikes. Thankfully for diplomats, this task becomes second nature. The same cannot be said for political figures with a penchant for radical statements on social media sites that encourage reactions over substance.

Known for his infamous policy-through-Tweet tendencies, former president Donald Trump utilized social media throughout his term to pursue American interests abroad. One qualitative analysis of his Tweets while in office found that they tended to demonstrate “negativity, grandiosity,” and judgment of other nations, all of which defy the traditional diplomatic code and promote a climate of animosity[2]. In response to military posturing from his Iranian counterpart and several months after letting the Iran Nuclear Deal expire, for instance, President Trump tweeted:

“To Iranian President Rouhani: NEVER, EVER THREATEN THE UNITED STATES AGAIN OR YOU WILL SUFFER CONSEQUENCES THE LIKES OF WHICH FEW THROUGHOUT HISTORY HAVE EVER SUFFERED BEFORE”[3]. [1] [2]

Such a message undermines the guidelines and purpose of the diplomatic code. Equivocal and constructive messaging are designed to avoid conflict, while this Tweet openly threatens great suffering through highly inflammatory language. Such a message also struggles to achieve ambiguity and position hedging: Trump directly addresses the Iranian president, as opposed to working through the State Department or international organizations that provide communication frameworks. Even this Tweet’s tone undermines achieving workable solutions as it pushes the U.S. stance to its most extreme, blocking off potential avenues of addressing conflict. Regardless of how controversial the nuclear deal may have been, sending a threatening message in all capitals only fans the flames of an already faltering relationship. That is not to say trained diplomats cannot express anger against foreign officials. However, if they use diplomatic code, they may pay greater attention to maintaining ongoing relationships and keeping options open instead of inciting a presidential flame war.

Centralizing diplomatic power in individual accounts, as in the case of @realdonaldtrump or @POTUS, also raises security issues. Following the saga of the U.S. - Iran relations, Twitter recently suspended an account that seemed associated with Ayatollah Khamenei for posting an edited photo of a military plane flying above a golfer bearing a resemblance to Donald Trump. A company spokesperson claimed the account was fake, but not before several major media outlets, including Reuters, reported it belonging to the Ayatollah, as well as the same image appearing on a website linked to his office[4]. Though the Tweet did not elicit any military reaction from the U.S. in response to threatening the life of the President, Twitter’s growing role as a medium for official communications could spell danger with improper security measures. Social media’s ability to instantly send messages to millions leaves international and military security vulnerable to hackers or imposters.

So far, we have seen individual official accounts utilizing platforms, but the audience is just as important. Social media often works through the masspersonal communication model, or the potential for one person to broadcast a highly personalized message to many. Through the Obama administration, masspersonal communication manifested such that the vast majority of resonance, as measured by audience engagement on social media accounts, came from either the U.S. or Western Europe[5]. Expected, certainly, but such a pattern demonstrates a failure when messages in the areas of human rights and peacebuilding experience the most resonance from those nations which need it the least. That is, if an American official hoped to utilize their position in order to spread human rights awareness to areas suffering the most from such injustices, they would have instead mostly reached their own constituents. Interestingly, although diplomatic messaging failed to truly reach a global audience in general, this is the exact area in which social media could exert the most influence on international relations if appropriately utilized. Seasoned diplomats and historical feats of diplomacy, even if they came before the time of Tweets and timelines, suggests how to best utilize social media to enter into a new era of international relations.

Richard Holbrooke, architect of peace accords in Bosnia and a special advisor on Afghanistan in the State Department, once lamented public diplomacy’s deterioration due to “...pathetically outdated or inappropriate technologies” and a failing bureaucracy[6]. While Holbrooke lived to see Barack Obama create the first U.S. presidential Twitter account, he did not witness the nascent social media diplomacy: a new way of achieving foreign policy interests through smartphone apps. To better understand how social media changes today’s landscape, however, we must first turn to the world’s highest-stakes diplomatic endeavors: the Cold War.

The United States faced one of its most challenging diplomatic challenges during the Cold War, through which it dedicated a mass of resources to both traditional high-level diplomacy and public diplomacy. The politically bipolar world sparked in Vietnam and Cuba, but the U.S. took a broader approach to increase power: in 1953 came the United States Information Agency (USIA), the point agency for all American public diplomacy. Public diplomacy refers to state attempts to advance foreign policy goals by influencing citizens of other nations, as opposed to officials. USIA executed this for several decades through promoting films, books, educational exchange, and language, considered by many former officials, including Holbrooke, to be one of America’s most successful attempts at centralized public diplomacy[7]. At the same time, however, Cold War president Nixon and his Secretary of State Kissinger believed that the U.S. and U.S.S.R. could never achieve ideological agreement, only a nonviolent peace. They pursued back-channel, high level diplomacy in order to facilitate talks culminating in agreements such as the Strategic Arms Limitation Treaty, which required a great deal of resources to achieve[8]. These two avenues to international relations – a grassroots approach and a top-down approach – gradually improved the rapport between these two nations, but only after half a century scarred with proxy wars and nuclear armament.

In 1999 USIA was dissolved, a decision that many former officials and diplomats opposed. In a survey of these former USIA officials, who crafted public diplomacy throughout the Cold War, the objectives of maintaining good relations with foreign publics and creating positive imagery of the U.S. remained just as high priorities today as they did with the Soviet Union[9]. The gap left by USIA and a reflection on the difficulties of the Nixon approach to diplomacy create the most promising opportunity for social media diplomacy that can pave the way to greater peacebuilding and improved global relations.

To better understand how it will do so, we may study one recent case of agenda building through public diplomacy between the U.S. and India. The 21st Century saw these two nations strain their relations over dealing with India’s nuclear neighbor Pakistan, which chilled formal relations between their governments. While visits from leaders dominated network news in 2014 and 2015, Twitter engagement around official government and news accounts tended to increase political congruency between Indian citizens and the U.S. through sharing Tweets and opinions, particularly increasing connections between Indian citizens and then-president Barack Obama[10]. This congruence can build a nation’s soft power and facilitate their agendas since public support for a foreign nation translates into stronger formal ties. One area the U.S. can continue to use such informal power building through social media is in establishing and building new multilateral agreements, such as the Quadrilateral Security Dialogue, or Quad, between the U.S., India, Australia, and Japan. This relatively new agreement between four politically distant nations may have been assisted by public diplomacy attempts, like visits in 2015, enabling their governments to pursue deals with confidence from their own constituents. The Quad’s future is still uncertain in the Pacific World, but social media’s power in public diplomacy indicates new modes of easing tensions between nations unfriendly on official terms or with few existing ties.

Government agencies are not exactly known for their agility in adapting to new technologies or for undergoing systemic changes in their structure. It would be unwise to expect a sudden shift to efficient social media usage in America’s extensive foreign service or State Department, to say nothing of the world’s many diplomats and dignitaries. Though social media’s role is still undecided, it clearly endangers traditional forms of conflict avoidance and creates worrying security risks, but at the same time may be an essential tool in building rapport and peace in the global community. The United States is just one example of a government failing to capitalize on the benefits fully and understand digital diplomacy risks in their entirety. The road ahead is filled with uncertainty and rapidly changing technologies but, if Dr. Strangelove is to teach us anything, it is to avoid complacency with failing institutions lest they end in total nuclear destruction.

[8]    Jussi M. Hanhimäki, The Rise and Fall of Détente: American Foreign Policy and the Transformation of the Cold War, 1. ed, Issues in the History of American Foreign Relations (Washington, DC: Potomac Books, 2013).